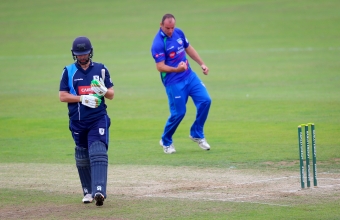 With the two sides boasting a host of Irish internationals, the final 50-over clash was effectively a final given that the winner of today’s match would top the table and claim the Cup.

After Lightning captain George Dockrell won the toss and elected to bat, the Lightning were immediately put on the back foot by the early bowling of the Warriors Andy Britton. Bowling in cool, breezy conditions Britton demolished the top order and reducing the Lightning to 34-5 – a spell which included the prize wickets of Andrew Balbirnie, Simi Singh and Kevin O’Brien. Britton finished with 5-23 from 10 overs, which was credited as the second best bowling figures in the history of the 50-over Inter-Provincial Cup.

Gareth Delany was the only hold out, compiling a valiant 67 from 109 balls (4 x fours; 4 x sixes). His dismissal left Lightning at 148-7, however the tail wagged and Dockrell (39), Lorcan Tucker (45) and Tyrone Kane (57) ensured the Lightning recovered to post a competitive total of 253-8 from their 50 overs.

In response, Warriors opener and Irish Test and One-Day captain William Porterfield set about a masterful innings in an attempt to lead his side to victory. However, wickets fell at regular times and when Porterfield fell for 71 (off 87 balls; 11 x fours) the Warriors were on a precarious 129-5.

Stuart Thompson (25 off 33 balls; 4 x fours) and Andy McBrine (30* off 41 balls; 4 x fours) showed some late intent with the target surpassing a run-a-ball required, but Lightning’s experienced bowling attack were decisive when it mattered. Kevin O’Brien, after taking punishment in his first spell, came back into the attack to help clean up the Warriors tail which included a triple-wicket maiden over in the 39th over.