May 3rd 2022 by Gerard Mulreaney | International 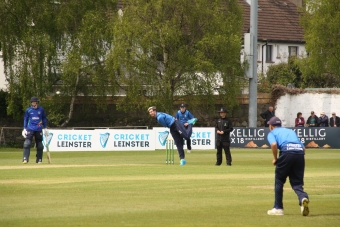 DUBLIN – A brilliant display of bowling from captain George Dockrell, along with a Harry Tector unbeaten half-century gave Leinster Lightning a 7-wicket victory over the North West Warriors in the opening men’s Inter-Provincial Cup match at Pembroke Cricket Club.

Having been put in to bat by the Lightning, Warriors opener William Porterfield hit his first boundary of the season off Barry McCarthy in the first over to show clear intent. Porterfield and Stephen Doheny put on 73 runs for the first wicket in 18 overs, before Doheny top-edged a ball from Dockrell to be caught at short fine leg.

Andy McBrine (12) came in at three as the Warriors looked to re-group, only to fall to Simi Singh (2-54) shortly after – McBrine had hit Singh for a boundary with the previous ball before Singh responded by clean bowling the Warriors captain.

The Warriors had 100 runs on the board in the 28th over when Porterfield hit a boundary off Singh, but it wasn’t long before Porterfield (44) found himself heading back to the pavilion, when he was caught behind by wicket-keeper Lorcan Tucker in the 32nd over. Dockrell then ran through the middle-order with the Warriors collapsing from 107-3 to 121-8 in six overs - Dockrell’s 5-24 from 10 overs was his second-best List A figures.

Tailenders Jared Wilson (18) and Ryan Macbeth (29) combined to score 38 runs as the Warriors pushed on late to post 185 from one ball short of their full allocation.

In response, the Lightning’s Tim Tector (47) and Simi Singh (5) opened the batting, however, the loss of Singh and Andrew Balbirnie (12) saw the Lightning on 42-2, and it looked like game on.

Harry Tector then joined his younger brother Tim at the crease, and they put on 74-runs in an excellent third-wicket stand. Unfortunately for Tim, he fell in the shadow of his maiden List A half-century, but Player of the Match Dockrell came to the middle to replace him and the Lightning went on to run out comfortable victors. Harry Tector finished on 76* from 88 balls and hit the winning runs in the 44th over, square-cutting Graham Kennedy to the boundary.

The Lightning’s comprehensive seven-wicket win has certainly set a marker in the sand for any contender to their 50-over title.