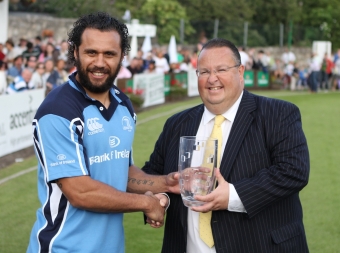 Isa Nacewa is presented with the trophy by Philip Smith

A good crowd of over 1,000 people packed into the Sydney Parade grounds at Pembroke Cricket Club in Sandymount as the Sun shone for a great family day that saw the stars of Irish Cricket and Leinster Rugby come together to raise important funds for Spinal Injuries Ireland. It was no surprise to see the natural sporting talent of the Leinster Rugby Squad members convert over well to the cricketing code.

Leinster Rugby batted first, stars such as Isa Nacewa, Leo Auva’a and Rob Carney took their turn to ‘pad’ up and they posted an outstanding 202 from their 21 overs, with 7 pairs batting 3 overs each. Alan Lewis and Andre Botha guested for the Leinster Rugby side and their advice was put to good use as the crowd saw plenty of sixes flying everywhere. Although it was a memorable day for Kim Garth, the Ireland opening bowler who knocked over Alan Lewis clean bowled!

The Cricket Ireland XI generously added 100 to the total they needed to chase but their generosity was severely misplaced as the Leinster Rugby lads thrived in the field and put the ‘squeeze’ on the Boys in Green throughout their innings. It took some outrageous striking from National Coach Phil Simmons to give Ireland a chance but as Leinster have done so often over the last few seasons, they closed the game out to run out winners by 70 runs.

Aaron Dundon was named the RSA Man of the Match for his cavalier Left-Handed hitting towards the end of the Leinster Innings in a day when both Rugby and Cricket were the winners.

Many thanks must got to all involved in organising the event including everyone at Pembroke Cricket Club, Spinal Injuries Ireland, the main match sponsors RSA Insurance and Accenture, Conor Hoey and all the volunteers and organisers. Let’s hope it’s the first year of what is set to become a highlight in the calender.

Battle of the Big Hitters gallery