May 10th 2022 by Gerard Mulreaney | International 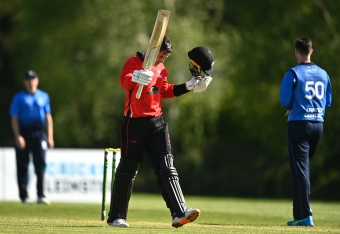 DUBLIN – The largest-ever successful run chase in the Inter-Provincial Cup’s history – headlined by a thrilling 152 from Munster Reds captain PJ Moor - secured a remarkable victory for the Munster Reds in their top of the table clash in Pembroke.

Having been set a target of 305 to win on a very blustery day, the Reds produced a record-breaking performance to claim back-to-back wins in this seasons’ Cup competition.

The Reds fielded an unchanged team from last week’s win over the Northern Knights in Stormont, while there were three changes to the Lightning line-up - with Simi Singh, Josh Little and Muzamil Sherzad all out and replaced by Greg Ford, Theo Dempsey and Mikey O’Reilly.

The Reds won the toss and elected to bowl first, and that decision bared fruit early on, with the wicket of opener Tim Tector falling in the fifth over. Having been dropped by Murray Commins in the previous over Tector (8) edged the ball to Curtis Campher at 3rd slip.

Andrew Balbirnie and Harry Tector then came together and settled the Lightning’s innings. Balbirnie, playing on his home ground, hit a short ball from Barry McCarthy for six in the 15th over to move onto 13, the ferocity of the shot meant a change of bat for the Ireland captain. He was dropped in the 29th over by Tyrone Kane when on 31, cutting one hard to point but Kane failed to gather it in. Harry Tector has been scoring runs for fun of late and continued that here. He looked very assured from the outset, and the longer both he and Balbirnie spent in the middle the better they played. They racked up a 100-partnership in the 34th over, with Balbirnie scoring a half-century in 82 balls in the 36th over with a single to mid-wicket off the bowling of David Delany. Tector followed five balls later off 78 balls, when he hit a single through square leg also off Delany.

The Balbirnie/Tector partnership of 132 ended in the 40th over when Balbirnie (62, off 96 balls) fell to a superb catch at deep extra cover by Campher off the bowling of Mike Frost. After hitting three straight boundaries off Campher in the 46th over Tector (92, off 107 balls) fell while approaching a century, caught by Murray Commins. The sense of frustration was evident as Tector left the field.

Last weeks’ Player of the Match, captain George Dockrell came to middle with intent, scoring a quick-fire 38 off 23 balls before he sliced a delivery from Delany high to extra cover where Fionn Hand was on hand to take the catch. Hand gaining some sort of redemption after Dockrell had hit him for two sixes a couple of overs previously.

After late flurries by Lorcan Tucker (32*) and Barry McCarthy (18), the Lightning finished on 304-6 from their 50 overs – with an incredible 105 runs coming off the last seven overs.

The Reds began their innings with Moor and Murray Commins looking comfortable, however Commins (17) fell to a great catch from Dockrell in the 14th over, with the Reds on 61. Tyrone Kane joined his captain in the middle and hit a quick-fire 27 off 33 balls as they moved on to 134-2 after 25 overs - Kane falling to a Harry Tector catch when trying to up the ante.

Despite the loss of two early wickets the Reds were moving along swiftly, and Moor brought up his century in the 31st over, off just 92 balls. Campher (29) lost his wicket shortly after, when he hit the ball onto his own stumps off the bowling of O’Reilly, and the Reds were 181-3.

Moor was smashing the ball all over the Pembroke cricket ground and made it to 150, after hitting Gavin Hoey for 6 over the long-off boundary. A couple of balls later and Moor was gone, after hitting 16 fours and 8 sixes, as Jack Carty ran in from extra cover to take the catch from Barry McCarthy’s bowling. Moor’s innings was the highest individual score in Inter-Provincial Cup history, surpassing Simi Singh’s 136 in 2016.

Kevin O’Brien chimed in with 37 off 39 balls late on as the Reds closed in on victory. Gareth Delany and Matt Ford finished off the run chase, with Ford hitting the winning boundary over the fielder to the long-on boundary.