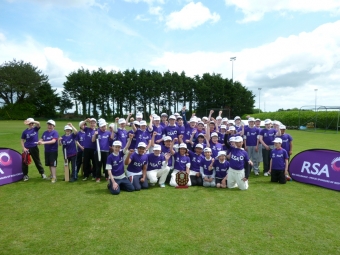 The sides were all vying for the trophy which was won by St. Josephs of Glanmire in the competitions’s inaugural year last year at The Mardyke . In all there were 6 Cork based sides, one from Lismore and for the first time, one from Limerick. The Farmers Cross ground, was bathed in sunshine for the entire day and all sides enjoyed three matches each with a final then being played between the Lismore schools side and the Limerick schools side. In a tight contest, with a sizeable crowd watching, the Limerick side won out and thoroughly deserved to lift the trophy in the end with some superb performances throughout the day.

The Munster Cricket Union’s Ted Williamson was delighted with the day and also how the event has grown since last year. “We had two extra sides involved this year and we hope to double the total number of teams by next year. The aim is to commence a hard ball competition in 2013 but still run the soft ball version for schools who are new to the game. Having RSA involved added greatly to the occasion and we are very thankful for their support” added Williamson.