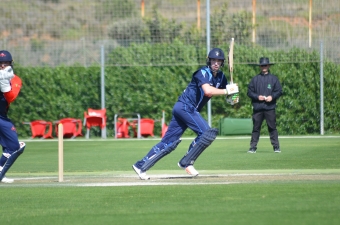 Knights captain Gary Wilson won the toss and elected to bat first on a pitch that looked full of runs. And at the halfway mark of the Belfast-based side’s innings, Wilson probably felt the call was justified with his top order comfortably moving to 112-1, and laying a good platform for the big-hitting middle order waiting to enter the fray.

Opener Marc Ellison, who hit a List A career-best 87 yesterday against the North West Warriors, followed up with 85 today. Harry Tector, who plundered a 36* from 14 balls yesterday, notched up a well-compiled 57 from 59 balls today, while the powerful Mark Adair followed up his 15-ball 44 yesterday with a 31* from 12 balls, which included an incredible four sixes being hit off one Peter Chase over.

The Knights’ final score of 290-8 (158 of which came in boundaries - looked to be a highly competitive total.

However, as foreshadowed in yesterday’s match preview, the Knights knew they could not relax against the Leinster Lightning batting unit and on-lookers saw exactly why that is the case.

Despite the early losses of Jack Tector for four (dismissed by his younger brother Harry) and Stephen Doheny for 10, the Lightning side re-grouped quickly and wrestled back control of the game through a brilliant 162-run third wicket partnership between Andy Balbirnie (125) and Lorcan Tucker (81). Scoring at better than a run-a-ball, the pair hit to all parts of the ground and put the Lightning within striking distance of the victory.

When Tucker fell after his 70-ball stay, there was still some work to do with 111 needed from just over 15 overs, but Balbirnie continued to punish the attack and found an equally attacking partner in Kevin O’Brien, who hit 49* from 33 balls.

Balbirnie fell late on for his highest score in the Cup (and purportedly the first List A century scored on Spanish soil), but O’Brien and Simi Singh finished off the run-chase with more than three overs to spare.