Limerick Cricket Club coming together during a time of crisis 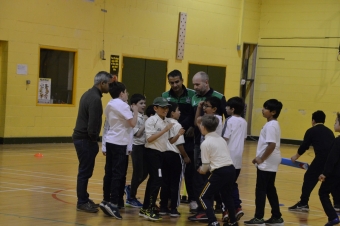 The Limerick CC coaches on a school visit

LIMERICK – After plotting its most comprehensive pre-season programme in preparation for a big 2020, the Coronavirus (COVID-19) pandemic took the wind out of the Limerick Cricket Club’s sails – but not for long, as the Club’s members and volunteers are pulling together during these challenging times.

While cricket has been played on the banks of the Shannon for around 200 years, Limerick Cricket Club itself was started by a group of local cricket enthusiasts in 1968. It recently celebrated its 50th anniversary, seeing its 1st XI make the final of the Clear Currency National Cup for the first time in that celebratory year.

The club was preparing for another year of growth in 2020 before the COVID-19 pandemic outbreak. Despite the challenges and uncertainty, the club’s members and players are optimistic about the future.

“At this moment, it is unclear how heavy the impact will be for the club. We were feeling like we were in a good spot with our pre-season preparations – in fact, it was probably the best we had prepared for a season since I’ve been in the club, after holding a full schedule of indoor sessions stretching back before Christmas.”

“There was a significant level of anticipation towards getting outside and playing, and – when I think about our schedule - we would have played two pre-season games already and the season would be underway proper - but COVID-19 put rapid halt on our season.” Image: The team in action in 2019 (photo Donna Broadhurst)

One of the biggest disappointments for the Club at the moment is around the lockdown’s impact on youth cricket:

“It’s a big blow for our youth section, which was really starting to develop off the back of regular training sessions every Sunday. There are some individuals in our club who I know will feel a massive impact just by not being able to play the sport they love. Fellas have been practising out in their backyards and would do anything to be back playing.”

“It’s particularly tough on many of the young lads, who were coming off a great breakthrough season last year. They are so eager to improve and promote themselves up the teams in our club. For them, patience is so important in a time like this and it will be about retaining the belief that they can pick up where they left off when this ends.”


Hackett believes that the crisis though has brought the important aspects of club life into sharp focus:

“Every club is going to take a hit financially, but to what extent is so much up in the air at the minute. However, and most importantly, we have stated that our player welfare is the most important thing during this crisis.”

“There is a huge mental health aspect to this lockdown and the last thing we would want is for our members to be feeling alone during this time. Our chairman, Chris Thomas, has openly offered to be in contact with any member who even just wants a chat. We know how much the players of Limerick Cricket Club love the game and it will impact upon their well-being to be without it. If we can pull through this virus as a club, without any of the aforementioned mental health issues occurring, that would be a massive win for us and a big positive to take from such a hard and long period.” Image: Limerick hosted the MCC in May 2019

“We keep in touch with members as regularly as possible, and have vibrant Whatsapp forums which our players use to share videos, pictures and quizzes. Open discussions and witty banter have kept the spirits high. One of our youth players made a home video of him training out his back which Munster Cricket posted on their Facebook page, which was great to see.”

“From a club perspective, our committee has also been taking this period to explore sponsorship and publicity opportunities, as we believe this could have a positive impact on our club’s recovery when we finally resume. We have a very generous committee, in terms of the time and effort we put into the day-to-day running of our club, so I would be confident that we can work together to find positive outcomes from all this.”


Limerick was one of more than 50 clubs across Ireland to benefit from the Cricket Ireland Club Facilities Fund, but a series of unanticipated events have the Club considering their options on how to target the funding to best benefit cricket in the area:

“We are looking at various options for targeting the funding to make the best use of this money. Originally we sought grant funding for projects such as new sightscreens, a new mower, and other equipment, however, we discovered after receiving the funding that the complex we are based at is set to undertake construction work that meant the wicket would be unavailable for a period of time. We just then begun to consider alternative uses of the funding when the Coronavirus pandemic struck. How long we are out of action will heavily influence how we will now propose to expend the money now, but the Committee is determined to find a usage that creates a legacy for the club and local community.” Looking towards the future, Limerick Cricket Club is in a strong position to build on its recent successes:

“This year Limerick Cricket Club looks in better nick than ever with four competitive sides in each of the four Munster Cricket Union divisions, and 70 playing members. Our current position, however, has been built on many years of hard work and achievement on and off the field.”

“The high point of success on the field was certainly the 1980s, which brought four senior cups and three senior leagues, but we have always struggled to compete for members with the sporting giants of GAA, rugby and soccer, Being without a permanent home pitch for many decades, there were times the Club was teetering on the edge of folding. But with great effort and commitment from our members, we found a new home in 2011 at the Adare Recreational Community Complex - located just 15 kilometres from the City of Limerick.”

“Our club has enriched itself in developing a sense of community in the local area, obtaining sponsorship from the nearby Woodland’s Hotel and frequenting Bill Chawke’s gastro bar after matches on Saturday and Sunday evenings where servers and customers take great interest in the team’s progress.”

“We now run our own online shop selling playing gear to leisure gear supplied by Surridge Sports, and social media exposure gives the community a chance to keep up to the date with their local cricket team. Our team of qualified coaches deliver youth cricket for all ages and abilities on a weekly basis, and James our groundskeeper is out there every Friday morning to ensure an optimum outfield for the weekend’s games.”

“All these little things echo the ethos of Limerick CC in providing the best cricketing opportunities to all its’ members, with the goal of success both collectively and individually. The club has seen its players represent both provincially and even nationally through John McDevitt, who was capped for Ireland in 1986 on their tour of Zimbabwe. Such pathways and ambition motivate the Limerick Youth week-in, week-out to succeed at the highest level.”


Hackett cites diversity as a great strength that the Club draws from:

“Our members’ nationalities range from across the pond to Asia and beyond - a multicultural and cosmopolitan atmosphere is ever-present in our outreach. Limerick has provided opportunities to underdeveloped communities in the city and surrounding area, extending as far as the cities refugee centres. Giving these families and individuals an escape to the sport they love has been the club’s biggest achievement above all and culminates into the spirit that is Limerick CC.”


Despite the on and off field success, the Club have had to deal with a recent setback with the untimely loss of one of its promising young members:

“We really experienced a major emotional setback in the loss of a close, young teammate in Mustafa Sidiqi. ‘Musti’, as he was commonly known around the club, won both LCC Player and Young Player of the Year in 2016, breaking into the first team within short time of his arrival.”

“Musti’s fondest memory was representing Limerick in the Clear Currency National Cup Final in 2018. He took four catches that day in what was a close game. A part of me struggles to find the words to describe the loss of such a lively and enthusiastic friend to our club, the potential and what could have been in his life hits a sore wound, but Musti’s legacy will be timeless in the hearts and thoughts of our club.” That National Cup Final appearance was not only a highlight for the Club, but gave a lift to the whole City:

“With emphatic wins over Knockharley and Galway in the quarter-final and semi-final rounds respectively, it would be a fairy tale ending for Limerick to upset the odds against Rush at Rush’s home ground in the final during our 50th anniversary year.”

“The team were looking to follow in the footsteps of their hurling peers by bringing national silverware back to the Treaty County. However, after a performance that was filled with resilience and pride we fell just 26 runs short, pushing Rush until the final few overs of the match. The ‘Hush in the Rush’ was followed by a rewarding invitation for a Mayor’s visit in which the then Limerick mayor Daniel Butler congratulated the team on their heroics.”


Seeking to push the Club forward, Limerick has recently introduced a ‘Friday Night T20s’ event, indoor winter leagues, an annual Awards Night and have even arranged tours to destinations such as Lanzarote and Malta. In 2019, the club also hosted Marylebone Cricket Club for their inaugural visit to Adare as part of their Irish tour.

Hackett believes the future is bright for the Club, and sees a way forward after the current crisis ends:

“Long-term stability through basing the Club in Adare has given us a great basis to move forward. With improved facilities such as a clubhouse, sightscreens and grass wickets on the agenda we believe that we can convert the Club’s maiden half-century of existence into a full century. And beyond.”