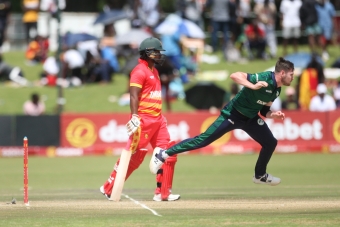 HARARE, Zimbabwe – Ireland Men won a closely fought match by 46 runs in Harare to level the ODI series 1-1 with one to play. Josh Little took career-best ODI figures of 4-38 to close out Zimbabwe’s hopes of victory, along with milestone performances with the bat from Stephen Doheny and Harry Tector, which helped Ireland post 294-7 in the first innings.

Despite strong resistance from Gary Ballance and Innocent Kaia, who both registered fifties, the home side were bowled out with two overs and three balls left in the match.

Following Wednesday’s thrilling match in which Clive Madande was the hero, hitting a boundary off the last ball to shatter Irish hearts, today’s game in Harare was also evenly matched until a late flurry of Zimbabwean wickets, with the series now still alive going into its final act.

Paul Stirling captained in the absence of Andrew Balbirnie, who suffered a concussion in the first ODI. Ireland lost the toss and was asked to bat, with Murray Commins making his international debut.

Creating a good platform first up, Stirling and Doheny combined for a 100-run partnership in 20 overs, including two huge sixes from Stirling on the leg side. After he was dismissed in the 21st over and Commins departed soon after for six, Doheny combined with Harry Tector to score the bulk of runs. In just his second ODI appearance, Doheny registered his maiden half-century off 76 balls.

Coming in four runs short of 1,000 ODI runs, it took Tector just eight balls to break Stirling’s record and become the fastest Ireland player to reach the milestone in men’s ODIs, taking just 25 innings to do so.

Zimbabwe turned to the short-ball tactic with few other options to limit Tector and Doheny, but the two batters cashed in, with the team’s 150 coming up in the 31st over – in which Sikandar Raza was hit for two boundaries. Doheny was finally dismissed for 84 by Ryan Burl, top-edging a reverse sweep, and Ballance taking a good, low, diving catch.

Congratulations Harry, an incredible achievement! Some big names in that top five

Continuing from his brilliant hundred in the first match of the series on Wednesday, Tector went on to smash 75 from 61 balls, giving Ireland hopes of a 300-plus score. In a fiery moment of frustration, Victor Nyauchi threw the ball at Tector in his follow-through, despite the batter never leaving his crease, hitting him on the shoulder and prompting the umpires to intervene and calm tensions down. Tector followed up a few overs later with a huge six straight down the ground off Brad Evans and a four off the following ball.

Once Tector was finally dismissed, Ireland fell just short of the 300-run mark, despite useful cameos from George Dockrell (30) and Lorcan Tucker (11).

The ever-present threat of rain held off, and Zimbabwe began their innings with Little dismissing Tadiwanashe Marumani LBW with his second delivery.

A promising partnership from Kaia and Chami Chibhabha worth 90 may have had Ireland fans worried early on in the chase, but nerves would have steadied after Andy McBrine got Kaia’s wicket, thanks to a brilliant diving catch from Graham Hume, with Little continuing his magic to dismiss Chimhabha.

Despite Zimbabwe keeping up with the required run rate through the majority of the innings, Ireland’s bowlers kept making crucial inroads to peg them back. Mark Adair got the all-important wicket of Raza before Campher effected a fortunate run out of Ryan Burl at the non-striker’s end. Campher got a small touch on a straight drive from Ballance in his follow-through, which deflected onto the stumps with Burl out of his ground. It was a big moment going into the last ten overs with Zimbabwe needing 88 more runs.

There was to be no end of match heroics from Madande this time though, with Little taking out his off stump with a hooping delivery and claiming Richard Ngarava as his final victim to complete his career-best ODI figures.

Mark Adair took the final wicket to complete another thrilling match in Harare, with the series decider set to be a blockbuster on Monday.