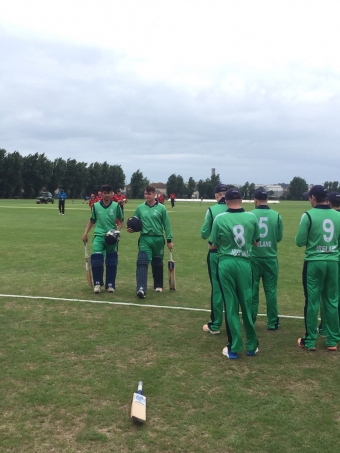 Ireland overwhelmed hosts Jersey at FB Fields on Friday, left-arm seamer Josh Little following up a breezy 33-ball knock of 35 with four for 28 to claim the Player of the Match award.

Jersey’s bowlers had done well to dismiss Ireland for 227 after they had appeared to be cruising at 118 for two, but that proved to be more than enough as the hosts’ batting fell to pieces against a sustained Irish attack and the side was bowled out for 52, giving the tournament leaders a thumping 175-run victory.

The foundation of Ireland’s total was a fine innings of 66 by opener Jamie Grassi; although he rode his luck and was put down at least twice, his positive approach seized the initiative early on after Harry Carlyon had asked the Irish to bat first.

But once he departed the momentum slowed, and although skipper Harry Tector contributed a valuable 30 and Graham Kennedy 27, the middle-order was contained by a fine spell of off-spin by Carlyon, with leg-spinner David Bourne picking up four wickets for 53 at the other end.

It took Little’s innings in the closing stages which was instrumental in getting the total past the 200, and Ireland knew that Jersey would have to produce their best batting performance of the tournament to have any chance.

They had to survive a tricky seven-over spell before the lunch interval, but had lost two wickets by the break.

Any hope of an effective recovery was dashed soon after the interval, when three more fell in the space of four deliveries and Jersey found themselves on 20 for five.

Only Julius Sumerauer was able to reach double figures, and with Little bowling unchanged from one end Ireland relentlessly worked their way through the rest of the batting. Aaron Cawley picked up two for 10 and Varun Chopra two for 9, and with Kennedy collecting the last, the innings closed in exactly 25 overs.

“it was decent and it was about time I got a few runs actually,” said Grassi afterwards. “I just came out today and thought myself I needed to dig in for the team and on that wicket I fancied myself with the short straight boundary. We ran hard, backed up well, I think we batted very well, set a total for ourselves to bowl the other team out.”

The impressive win narrowed the NRR, but Scotland still have the advantage in that area going into the final two matches.

“That was the aim of it really but the main thing is that we win six out of six and not have to worry about the run rate,” added Grassi.

Player of the Match Little was delighted to have contributed again with bat and ball in the win.

“I’m just trying to keep things simple and do my job for the team,” said the Pembroke left-armer.

“The bowling unit are attacking the stumps on slow decks and backing each other. It’s good to get Aaron Cawley into the side - he’s been raring to go the past couple days and good to see him get a few.”

Ireland play Denmark on Sunday followed by the final match against Scotland on Monday - both at Grainville.