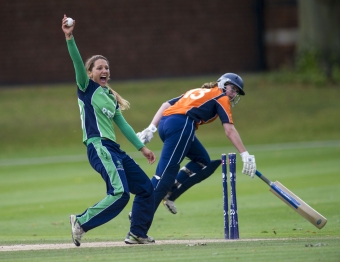 A win here at Rugby School will land Ireland the ICC European Division One Championships title.

After the U15s, U17s & U19s all secured victory in their European competitions, can Ireland Women make it a clean-sweep? Tweet us - @IrelandCricket

Ireland are European Division One Champions! Ireland coach Trent Johnston reflects on the progress of the European Champions over the last 8 months:

Brilliant effort from the Ireland bowlers to restrict the Netherlands to 86-4 off their 20 overs. Lucy O’Reilly led the way with a top figures of 4 overs, 2 maidens, 14 runs,, 2 wickets!

Clare Shillington & Cecelia Joyce get the Ireland chase underway - 87 runs away from the title!

Ireland have won the toss and will bowl first. Mary Waldron captains the side today:

We have won the toss and will field - @maryolo81 to captain today. Kate 12/ Isobel 13 pic.twitter.com/C0ukvnZfdg