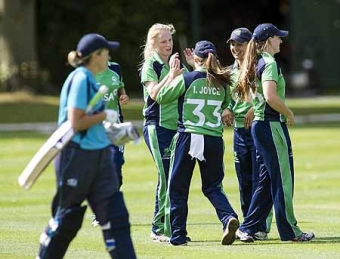 Ireland will be looking to make it three wins from three when they take on Scotland for the second time in the ICC European Division One Championships at Rugby School.

After the U15s, U17s & U19s all secured victory in their European competitions, can Ireland Women make it a clean-sweep? Tweet us - @IrelandCricket

Ireland have made it three out of three - top effort from the bowlers to restrict Scotland to 75-7 off their 20 overs! Top effort from the Ireland batting line-up to finish on 169-6. Elena Tice top scoring with 33 off 15 balls! Scotland have won the toss and will bowl first: While waiting for today’s match to get underway, check out the report & photos from Ireland’s win over the Netherlands and their win over Scotland.

Here are the highlights from both games:
Game Two:
Scotland Innings: