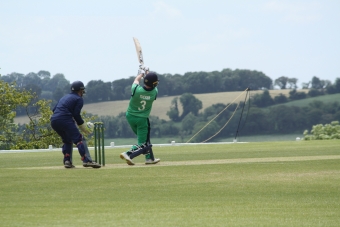 Lorcan Tucker brings up his half-century with a six

Earlier, Wolves’ wicketkeeper-batsman Lorcan Tucker had registered 51 from just 19 balls, including hitting five consecutive sixes off one Michael Leask over before being caught on the boundary attempting to make it six in a row.

Having won the toss and electing to bat, Ireland Wolves lost Jack Tector early for 2, but recovered well and put up a good fight for the first 13 overs. Led by Tucker’s half-century, and a determined 33 from Gareth Delany, further supported by Harry Tector’s innings of 22, the home side found themselves at 133-3 in the 14th over. The last six overs though saw six wickets fall for just 32 runs, as the Wolves finished possibly below par on 166-9 from their 20 overs.

The Scottish response was rapid – they lost their first wicket in the fourth over, however already had 47 on the board, thanks in large part to Munsey’s power hitting.

The wicket of Finlay McCreath (6) did little to stem the run flow, with Munsey (69), captain Dylan Budge (28 from 19 balls) and Craig Wallace (37* from 24 balls) taking Scotland A through to victory by seven wickets.

Craig Wallace was named Player of the Series, and the two sides drew the series 1-1, after the first match was lost due to rain.

Scotland A won by 7 wickets