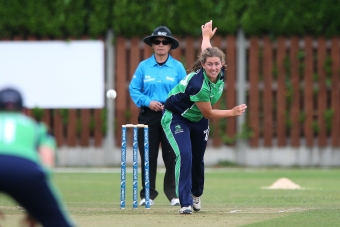 McCarthy in action for Ireland in 2016

DUBLIN – Cricket Ireland today confirmed that Louise McCarthy has been added to the Ireland Women’s senior performance squad after an absence of three years.

The 26-year old Pembroke pace bowler has 74 caps for Ireland after making her debut in 2010, however, took a break from international cricket to complete studies for a Masters of Diagnostic Radiography in Edinburgh.

“The squad Louise left in 2017 and the one she joins now are vastly different, so we are delighted that Louise’s experience can be added to this young side. She had 74 caps over seven years before her break for study, so her re-inclusion, once she became available again, was a straightforward decision for the selectors.”

“Her time in Scotland included playing cricket for Durham and at club level, so we have been monitoring her performance over the last few years and feel her addition to the squad will not only be of benefit to the team on the field, but will certainly be able to share her knowledge and experience with the younger players off the field.”

“Returning to the Irish squad wasn’t something I had completely written off, but my studies had become the priority. Then I was lucky enough to play for Durham last season in their 50-over and 20-over competitions, and that experience reinstated my fire for cricket. Playing with top quality players and against tough opponents week-on-week was something I realised I missed.”

“It’s a huge honour to be back in the squad. Most of the squad I would have been familiar with through playing Super 3’s over the years - there are still a few ‘old’ girls on the scene that played when I did. So it doesn’t feel a whole lot different - but I now feel old, if anything!”

“Ed [Joyce] has been fantastic - really accommodating and approachable, so essentially it’s been a nice environment to train in. I’m looking forward to getting back into competitive action soon.”

Asked about her last three months working in the health service, she said:

“I’m a radiographer in Dublin, so work didn’t stop for us during the pandemic! It was a weird and stressful place at the best of times, but it’s a job I really enjoy so I suppose, I signed up for it.”

“The senior squad is thankfully back to training now. While it’s a modified form of training, it is important that the players are back in the nets, as we build up towards the Women’s World Cup Qualifier hopefully later this year.”

“Louise’s addition to the senior squad is a boost for us all ahead of what will be an important period for this side. Her influence and enthusiasm has been felt by her teammates already, and she returns to the set-up understanding the challenge ahead.”

“While we look forward to returning to competitive action soon, the last week’s training has provided welcome relief and the squad has come through lockdown in relatively good shape. I’d like to acknowledge my support staff – particularly Greg Hollins our strength and conditioning coach, Jay Shelat our analyst and Beth Healy our Team Operations Manager - who have all helped keep the squad engaged, active and focussed throughout the last three months.”

McCarthy is the sister of men’s international Barry McCarthy, and credits her international breakthrough to Irish legend Miriam Grealey whom she dismissed in a club game at Malahide in 2010 – Grealey was a national selector at the time and was obviously impressed with the young pace bowler’s performance, giving her an international call-up a few weeks later.

The Ireland Women’s cricket team were due to compete at the postponed ICC World Cup Qualifier in July in Sri Lanka, however, the ICC will provide an update on the tournament’s status in due course.

: DELIGHTED TO BE TRAINING

Delany and Joyce delighted to be back in training ahead of a possible World Cup Qualifier.