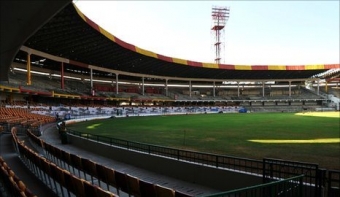 With less than two weeks to go now to the RSA Challenge, Emmett Riordan talks about a certain famous night in Bangalore and gets a very different perspective on March the 2nd 2011 and that infamous Kevin O’Brien innings.

During the third Ashes Test at Old Trafford, The Irish Times Cricket Correspondent Emmet Riordan talked to his English counterparts Richard Hobson of The Times and Nick Hoult of The Daily Telegraph about their memories from the World Cup meeting in Bangalore, Kevin O’Brien’s innings of a lifetime and being chased home by stray dogs.

When Kevin O’Brien strode to the wicket on a warm Bangalore evening in early March 2011, Ireland looked on course to suffer the kind of World Cup hiding at the hands of England that would again open up the debate on the merit of Associate nations playing in the tournament.

Like the majestic black kites soaring high above the M Chinnaswamy Stadium, England had their quarry just where they wanted them and were going for the kill.

Graeme Swann had just spun a ball past Ed Joyce’s bat for Matt Prior to stump the left-hander for 32 and Ireland’s reply to England’s massive total of 327 for eight was floundering at 106 for four, which was soon to become 111 for five as Gary Wilson became the English spinner’s third victim.

Up in the press box, journalists began to tap out their intros, hopeful of an early night and a chance to catch a Tuk Tuk back into the city in a bid to beat Bangalore’s strict 11pm closing time and enjoy a cold beer or two on a steamy evening.

After the excitement of their tied game against hosts India in front of a packed house at the stadium three days previously, the English scribes would again be praising a fine batting display that saw Andrew Strauss’s side top 300 for a second straight time, with Jonathan Trott’s 92 and 81 from Ian Bell the highlights on what was a brilliant batting track.

The five Irish newspaper journalists present were also getting down to work, wondering if Ireland would be able to rescue anything from a campaign that started with a disappointing performance in defeat to Bangladesh in Dhaka and with the mighty India to come next.

Sports editors were bound to lose interest we agreed, a problem in particular for the freelance writers, and we envisaged a daily battle to secure some space for the rest of the tournament against the mountain of rugby, gaelic games and soccer vying for column inches.

Heads started to lift from keyboards soon after as O’Brien hit Michael Yardy for two fours in three balls and followed it in the next over by clattering Swann for two sixes into the vast concrete terraces of the Chinnaswamy.

With no deadline pressure thanks to the time difference, the English and Irish journalists got back to watching the game and witnessed one of the finest one-day innings ever played in a World Cup, and of course the fastest, as O’Brien shaved 16 balls of Australian Matthew Hayden’s previous record to bring up his ton off just 50 deliveries, hitting 13 fours and six sixes along the way.

Alex Cusack made 47 in a match-defining 162-run sixth-wicket partnership with O’Brien, before John Mooney and Trent Johnston got Ireland over the line for an incredible three-wicket victory with five balls remaining.

The small Irish contingent of Irish supporters corralled beside the press box went berserk at the finish, while the normal decorum of the press box was thrown out the window as the Indians joined in with the handful of Irish to celebrate a famous victory before the reality dawned that one 600-word match report would become a handful of articles and a long night of work before the party could begin.

Their would be no party for the English journalists, just an increased workload, and plenty of searching questions of Strauss and his colleagues of just what went wrong out on the pitch.

There was also plenty of praise for the Irish performance, and in particular Kevin O’Brien, a player who would have only briefly have entered their consciousnesses beforehand thanks to his time with Nottinghamshire. Nick Hoult of The Daily Telegraph, which even mentioned the Irish victory amongst their editorials the following morning, still rates the knock as one of the finest he has witnessed in one-day cricket.

“In one-day cricket, it would be in my top three easily, given the occasion,” said Hoult, who is deputy cricket correspondent at the paper. “Because what often happens in those situations is when you have a sort of freakish innings is that when they get close to victory, when they suddenly realise they could win it, that’s when the pressure kicks in.

“You can swing the bat without pressure when you think you have no chance, but when you’re thinking ‘we’re 20 runs away from winning here’ you start to freeze, but that didn’t really happen, they just kept going, although there was a bit of luck, wasn’t there, catches went up in the air that were missed or bounced away from fielders.” Richard Hobson of The Times has also taken a keen interest in Irish cricket over the years and he was particularly taken by O’Brien’s attitude in the face of plenty of verbals from the England team as he proceeded to tear them apart.

“I remember the Irish players dyed their hair, Kevin O’Brien’s was pink I think. I remember describing it, thinking he looked like a punk rock cricketer flicking a V sign to the English,” said Hobson, before he recalled the reaction to some of the England players to the exuberant celebrations of the Irish.

“There was a lot of talk afterwards that England were a bit upset that they felt Ireland over celebrated, that they were a bit naughty in their celebrations and forgetting I suppose what it means for a lot countries to beat England in sport.”

The adrenaline rush of the victory certainly helped the Irish reporters get through a mountain of work – afterall how many times are you asked to write a cricket lead for the front page of the paper – before making our way to the team hotel where the party kept going in skipper William Porterfield’s room until the kites were again taking to the morning skies above Bangalore.

For our English colleagues, there was to be no such revelry, indeed not even a lift back to their digs.

“I remember leaving the ground and our bus driver who was supposed to be there, he had gone home because we were so late finishing,” recalled Hoult. “And we walked back to the hotel and the streets were deserted apart from packs of stray dogs that started to follow us.”

So you were pretty angry with the English team all round then that night I asked them?

“Oh, and the Irish team,” said Hobson with a broad smile.

It is just 3 weeks to the RSA Challenge at Malahide, with the Fortress filling up please get your tickets now!