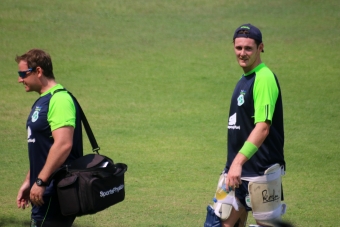 Ireland Wolves’ Mark Adair believes that he shouldn’t change the way he bowls in the upcoming white-ball matches which get underway in Chattogram tomorrow.

Adair, who claimed 3-22 in 16.4 overs - including eight maidens - during the four-day match against a Bangladesh Emerging XI last week, said:

“I was trying to be patient, it’s something I’ve tried to improve on. I haven’t tried to chase wickets or do anything special; the wickets would come from pressure and bowling consistently in good areas. I don’t think there’s going to be a huge difference in the way I’m going to go about my bowling in the one-day games – the tracks over here aren’t exactly filled with pace and bounce.”

The upcoming five-match 50-over series and the two-match 20-over series will be an invaluable experience for the players, given the senior men’s squad having vital ICC World Cup Super League matches and an ICC T20 World Cup in sub-continental conditions on the horizon.

Nine of the touring party in Bangladesh featured in the recent senior squad on their tour to the United Arab Emirates. In the series against Afghanistan in January, Lorcan Tucker scored 122 runs and averaged 40.66; Curtis Campher scored 98 runs in the three matches at 32.66 and they both showed that they have what it takes to perform overseas in similar conditions and get their team over the line this time around.

Adair believes that a mixture of youth and experience has been the perfect blend of this trip so far and thinks that will see some strong performances in the upcoming matches as the fresh faces eye up spots in the senior team with series against Netherlands, South Africa and Zimbabwe taking place this summer.

“I think this Wolves side is one of the more experienced ones we’ve had in a weird way. We’ve got nine guys out here who were in Abu Dhabi with the senior side so a lot of the guys have first-team experience.”

“The guys that haven’t played have a lot of experience elsewhere: Jeremy Lawlor, Graham Hume and Ruhan Pretorious are names that come to mind. They’ve played first-class cricket elsewhere and I think that is going to benefit us.”

“It’s a good side, a young side and there are guys that are hungry to do well and make impacts which is exactly what these trips are for.  If someone comes out here and does really well, they put their name into the hat for a spot in the senior team and that’s what everyone wants to do – they want to be playing regularly for Ireland.”

You can follow the upcoming matches on YouTube. There will be a link posted on social media each matchday. The Ireland Wolves hub will also have the latest news from the tour.