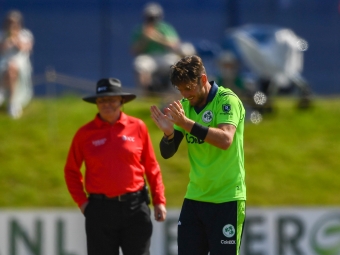 Mark Adair celebrates his first wicket in the first T20I

Speaking ahead of training, Adair said:

“I’ve grown up playing around Stormont, I remember even helping out the groundsman with the covers when I was young. In fact, my first live game of cricket was Ireland v England at Stormont where I was helping to pull the covers - so it will be nice to be back playing there again.”

“It’s been great to be back playing in front of crowds too. When Bal [Andrew Balbirnie] got his hundred the other day you saw the entire ground stand up for him. I don’t want to say it was emotional, but you got that tingling feeling once again. It gives us hope that in the not-too-distant future when teams like this come over we’ll once more see big crowds - and hopefully we’ll put in a performance against them.”

“T20 cricket can be a complicated game at times, but from game one we know that if we just closed out their innings better, and started ours a bit better, we could have been looking at 150 plays 150. We just need to simplify our game plan - I don’t think we need to do anything too differently, we just need to be aware of how we go about executing our plans and getting people within the team involved.”