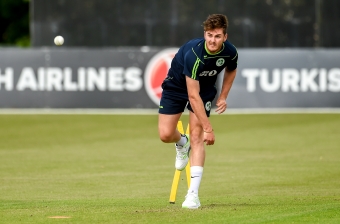 Mark Adair is keen to get the series underway

BARBADOS – It has only been eight months since Ireland’s Mark Adair made his international debut, but the Belfast paceman has well and truly established himself within the squad across all formats. After missing the first warm-up match of the current tour due to illness, he is keen to get the series underway and put the last few months of training and preparation into action.

Adair, 23, was first called up for the One-Day International against England at Malahide in May 2019. Since then he has made 27 appearances for the Men in Green, which included an eye-catching Test debut at Lord’s Cricket Ground, and an authoritative bowling display at the ICC T20 World Cup Qualifier during which he claimed 12 wickets at an average of 12.50.

The match tomorrow will not be Adair’s first ODI against the West Indies, he played in the two matches in Dublin last year, but feels that his game has evolved significantly since that time:

“I may have played my first international only 8 months ago, but it feels like there has been a lot of games between then and now. Every time I going out there I am learning from the guys I’m playing against and playing with.”

“That last match against the Windies back in May was tough, but I feel that as a cricketer I have changed a lot since then. I definitely feel like I have more control of my bowling and feel as if I know what I want to do - and who I am as a bowler. I’m no longer just about running in and trying to hit the top of off stump, there’s much more to it.”

“I had a bumpy start to this trip – I had a bad night and was feeling quite sick and missed that first warm-up game - but I’m through that now and looking forward to the series beginning.” Image: Mark Adair in action against West Indies in 2019

Adair reflects a confidence that his teammates share, but is still quick to acknowledge that he still has aspects of his game to improve.

“As a team, we’ve come out here with the intent to win and I hope we can deliver on that. International cricket certainly is harder and tougher than what you think it will be, but when you perform it gives you the confidence that you know you can compete with guys at this level.”

“I’m feeling pretty good after taking a few weeks off after the Qualifier, but I felt pretty hungry to get stuck in and work on correcting a number of things that didn’t go too well at the Qualifiers, particularly focussing a bit on executing with the bat. I showed glimpses last year, but I don’t just want to be seen as the guy who just comes in and slogs at the end, but instead become a serious batter - that’s something I’ve worked on over the winter and will hopefully continue to progress on this trip.”

Adair played in the most recent warm-up match on Saturday against the West Indies President’s XI and claimed 2-60 in the first real opportunity he has had to test himself here in match conditions:

“The pitches so far have been pretty flat, but regardless of whether the pitches for the internationals are flat or whether they’re a snake pit, the top of off stump doesn’t move and that’s where we need to try and be as accurate as we can. We can’t be afraid to bowl our bouncers and yorkers, but we need to ensure we have that very accurate stock ball.”

“The T20 World Cup Qualifier was a good trip for me, but the pitches in Abu Dhabi and Dubai were probably a bit easier that they will be out here.”

Adair was also quick to praise the recently retired Tim Murtagh, but recognised that the team must now move on.

“We haven’t really talked about how to replace Tim, he was obviously a very good and seasoned campaigner, we’ll probably miss him as much - or even more - off the field with what he brought to the team unit. Both in terms of cricket and non-cricket, he’s someone I learnt a lot from, and fair play to him he’d call you out if you weren’t working hard enough and that’s something we have to take forward.”

Ireland Men’s cricket team is in action for the first One-Day International against the West Indies tomorrow (Tuesday) at 1.30pm (local time) or 5.30pm (GMT) at Kensington Oval in Barbados. Cricket West Indies are shortly to announce broadcast arrangements for the series. The match will be livescored here.