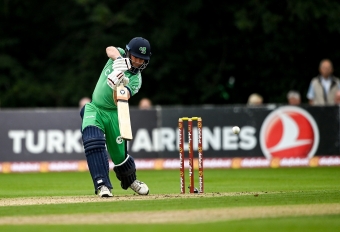 William Porterfield struck his third ODI half-century in a row

BELFAST - Persistent rain forced an abandonment of the second match of the Cricket World Cup Super League series between Ireland and Zimbabwe.

After Zimbabwe won the toss and opted to bowl first, Ireland were able to bat for 50 overs and put up a total of 282-8. But the action was brought to a halt there as rain entered the fray and, unfortunately, the match was unable to resume.

Prior to the adverse weather, Ireland had enjoyed some fine moments with the bat – their final total was their second-highest in 13 ODIs this year.

The experienced opening pair of Paul Stirling and William Porterfield put on their second fifty partnership in a row, though the former struggled to find his usual power – the hard-hitting right-hander perished for 33 off 71 balls as Sikandar Raza took a brilliant one-handed catch at short midwicket off the bowling of Sean Williams.

Porterfield was relatively more fluent – an off-drive for four off Richard Ngarava in the early stages was a terrific shot – and moved to his third consecutive ODI half-century off 73 balls at the end of the 26th over. Andrew Balbirnie was able to inject some real impetus during his 69-run stand with Porterfield, with a sweep for six off Williams signalling his intentions at the start of the 33rd over.

Tucker and Tector are smashing it everywhere!

The Ireland captain eventually fell for 40 off 43 balls, and while Porterfield departed for 67 just nine deliveries later, the hosts were just getting started. George Dockrell smashed a 19-ball 28 before Lorcan Tucker joined Harry Tector for a particularly enthralling partnership: the pair would put on 66 off just 36 balls.

Tector proved particularly effective at combining his power through the off side with the most deft of shots – a well-executed ramp off a Luke Jongwe slower ball to find four over the keeper’s head was the most eye-catching piece of work in an 18-run 46th over.

The 21-year-old – who now has four half-centuries in his last six ODI knocks – eventually fell for a 42-ball 55 in the penultimate over of the innings before Tucker was dismissed just moments later. But Ireland had momentum on their side; despite three wickets falling in the final over, a fine hit down the ground from Craig Young off the last ball meant Ireland still managed 14 from their last set of six. That, however, proved to be the finishing act of the match.

The abandonment meant the two teams finished with five Cricket World Cup Super League points each, but with just one match left to play, Ireland’s hopes of a series win are over.