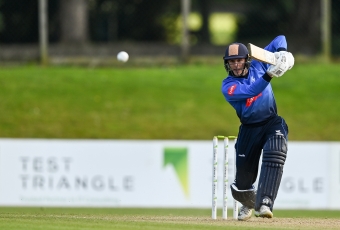 Saturday is the beginning of the 2021 Inter-Provincial Cup - the 50-over competition - and will see defending champions Leinster Lightning take on the North West Warriors at Pembroke. A fascinating contest awaits, with both sides eager to start their campaigns well.

With early season form hard to judge, and the impact of squad changes still yet to be felt on the field, we can perhaps look at how the two teams fared in this format in 2020, and then look at what potential impact the squad changes could bring about in 2021.

For the Lightning, the Leinster side played and won all four matches they were scheduled to play in the 2020 Cup competition. Six batters registered half-centuries (Lorcan Tucker’s 83 the highest score), while the Blues bowling attack impressed across the board, with Simi Singh topping the wicket-taking list with 10 wickets at an average of 13.70.

Inversely, the Warriors had less successful of a run out with two of their four 50-over matches rained off last season, and of the only two matches played (both being against the Lightning), both were also rain-affected.

The Leinster side came out on top in two encounters, however didn’t have the second match at Malahide go all their way, being pushed to the end by a spirited Warriors bowling performance when defending a low total.

For the Warriors, 2020 was challenging in terms of generating any sense of momentum and form, particularly with the bat. In their two innings in this format, no batter passed 50 (Graham Kennedy’s 46 was the highest individual score), while the North West’s bowlers struggled to settle into a rhythm, with Craig Young and Conor Olphert the only two bowlers to claim more than one wicket.

Both sides will be keen to get their campaigns off to a positive start, but with a 50% chance of rain and tops of 11 degrees expected, conditions may be challenging for both bowling units. In the result of a reduced-overs game, the team whose bowlers can bowling a containing line may come out on top.

The Lightning have lost stars Curtis Campher, Tyrone Kane and Gareth Delany to Munster Reds in the off-season, while Andrew Balbirnie, Josh Little and Rory Anders are all unavailable for the opening game. Head Coach Nigel Jones will not want his side to lose its winning edge and has still picked a match day squad featuring proven match winners.

The Warriors have added some valuable talent to their squad over the off-season. Shane Getkate and Stephen Doheny are among those names who will be keen to impress for their new teams, while the retention of William Porterfield, Boyd Rankin and Stuart Thompson give captain Andy McBrine some experience around the squad that will greatly benefit the young players. New Head Coach Gary Wilson will be keen to get his first match in charge off on the right foot. Leinster Lightning – Simi Singh
Simi Singh impressed with both bat and ball last year, scoring 104 runs at 52.00 and taking 10 wickets at 13.70 apiece. He unsurprisingly claimed the Player of the Year award at the Irish Cricket Awards and went on to translate this form in the international arena in the 4th ODI in January 2021 against UAE where he claimed remarkable career-best figures of 5-10 from 10 overs, after registering 54* earlier in the day. If the conditions are damp, Singh’s bowling will undoubtedly come to the fore, while his fearless late-order hitting will be an asset if early Lightning wickets tumble.

North West Warriors – Stephen Doheny
Stephen Doheny finished as the Leinster Lightning’s highest run-scorer in this format in 2020, amassing 142 runs at 47.33 - this despite fighting for a place in a side full of senior international stars. Doheny’s move to the North West was a surprise to many observers, but understandable given his hopes of playing regularly at this level. Doheny’s 79 against Northern Knights at North Down last year was imperious, and demonstrated (without really needing to) his undoubted talent. Given his first match of the new season is against his old teammates in Dublin, Doheny will be keen to impress.

Expected damp conditions mean that tight bowling in a reduced-overs encounter may be the deciding factor. Both sides have talented bowling line-ups, but who can quickly blow off the cobwebs and find their rhythm will be crucial. Despite a very different looking side to 2020, the Lightning still has game-changers like Kevin O’Brien and Lorcan Tucker who have the ability with the bat to take a game away quickly. So the key match-up may well be the Warriors bowlers versus the Lightning top-order. Which side dominates this battle will most likely prevail.