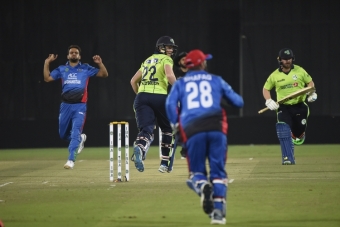 Kevin O'Brien gets off the mark in Game 1

Ireland has reason to be optimistic heading into the second ODI against Afghanistan, despite succumbing to their eighth straight defeat against them in T20Is on Thursday in Dehradun. The tourists contested on equal footing with the hosts for most of the contest - almost eerily so - with both sides suffering top-order slumps before being rescued by record-breaking lower-order partnerships.

When Ireland reduced their opponents to 50-5 in pursuit of 133, they looked favourites, and it took Afghanistan’s highest sixth-wicket partnership in history to get them over the line in the final over.

That Ireland were perhaps just one breakthrough away from victory should be encouraging, while, oddly, their first-innings slump might also offer reason for cheer. In their Quad Series in Oman, it was mostly the top three of Kevin O’Brien, captain Paul Stirling, and Andrew Balbirnie did the damage. Here Stuart Poynter and George Dockrell showed that they can compete even without a platform to launch from.

The signs were there that Ireland aren’t far from breaking the hoodoo their opponents hold over them, but they will need to do so quickly if they are to stay in with a chance of claiming the series’ honours.

Experienced all-rounder Mohammad Nabi was outstanding in the first T20I. His 40-ball 49* sealed the game for Afghanistan, but as important as finding a way to stop him scoring will be figuring out a method to score off him. His second-innings fireworks followed first-innings figures of 2-16, with Nabi the most economical of all the bowlers on show.

Ireland captain Paul Stirling rated Rashid as the big danger pre-series, calling him “the main difference between the two sides in the recent past”. But, after losing two wickets to the leggie’s first four deliveries, Ireland negotiated his threat well, with Stuart Poynter even hitting him for a memorable six in the penultimate over. “The positive intent we showed even against Rashid, we were very intent on sweeping him,” said Stirling. “I don’t mind seeing that. He got a couple of wickets but the lads were prepared to play shots.”

Nabi’s off-spin is a different challenge altogether. Less eye-catching perhaps, less likely to completely bamboozle you, but certainly no easier to get away. In the first T20I, 23 of his balls were pitched on a good length, and Ireland scored just one four off him, with 50 per cent of his deliveries dot balls.

Perhaps this is where the solution lies, not in trying to hit him out of the ground and the attack, but just trying to milk him for near a run a ball. He is third in the ICC T20I all-rounder rankings for a reason, and Ireland need to find a way to respect his threat while also not falling too far behind in the game in the process.

Another fairly slow, turning deck is expected. There might be a cloud or two, but the chance of rain is minimal.