MATCH PREVIEW: Ireland look to pick themselves up with a positive finish to T20 series 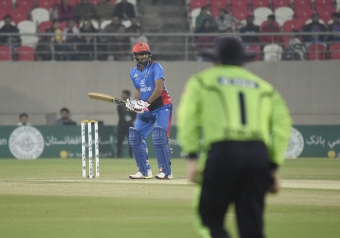 Ireland must dust themselves off and go again after being on the receiving end of a superb display of hitting from Afghanistan in the second T20I, with Hazratullah Zazai’s unbeaten century setting the platform for a series-sealing 84-run victory.

Paul Stirling’s side can take heart from an encouraging batting display, with the skipper, who hit 91 off 50 balls, sharing an opening stand of 126 with Kevin O’Brien – a new record partnership for Ireland in T20I cricket.

Shane Getkate, Simi Singh and Stuart Poynter also looked in good nick, each producing fluent cameos in a total of 194-6.

Ireland must somehow find a way to counter the fizzing leg-spin of Rashid Khan. But that is easier said than done. The second match of the series was reasonably balanced when the world’s No.1 T20I bowler came into the attack but very soon after his introduction the game had swung decisively in Afghanistan’s favour.

Rashid finished with figures of 4-25, taking his overall record against Ireland in T20Is to 24 wickets at an average of 7.58.

Ireland may consider strengthening their spin attack by bringing in the off-spinner Andy McBrine, while Stuart Thompson and 19-year-old all-rounder Harry Tector are also waiting in the wings.

The series may be lost but Ireland will have their sights set firmly on a first T20I victory over Afghanistan since 2013.

It took Ireland 17.3 overs to take a wicket in the previous match, which allowed Afghanistan to keep their foot on the gas throughout the innings as Zazai and his opening partner Usman Ghani ran riot, putting on an opening stand of 236 – a new T20 record for any wicket.

Boyd Rankin was the pick of the bowlers, taking 1-35 – excellent figures in the circumstances – and Stirling will hope his talismanic seamer can make early inroads to put the Afghans on the back foot before turning to his spinners. A muggy, sunny day is expected in Dehradun, and based on the runs scored in the previous match you would expect both captains to be eager to win the toss, bat first and post a commanding total.