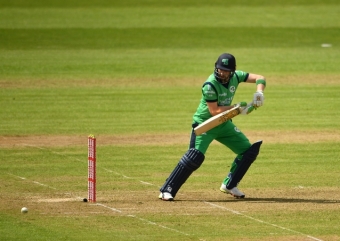 This match will be broadcast on Sky Sports Cricket in Ireland / UK.

The first ODI saw a below-par Irish batting performance put pressure on the bowling unit to contain a West Indian batting line up that has regularly posted 250+ run scores in recent years in the ODI format. Captain Andrew Balbirnie was quite quick in his assessment after the match yesterday, saying that he thought the loss was due to the failure to fire with the bat:

“I think it was obvious, with the bat. When you win the toss and bat first, and you’re all out for 180, you’re obviously below par. We are disappointed with our dismissals throughout, but we haven’t got long until the next game, so we’ve got to dust ourselves off, regroup and come out on Thursday all guns blazing. They bowled well, but I think we still have a lot of areas to work on with the bat. There’s no reason why we can’t turn it around and look to put in a much better performance in the next game.”

Conditions in Bridgetown are expected to be overcast, with a chance of overnight showers, so the pitch may have a little more in it for the bowlers early. Tops of 29 degrees are expected on the day, with afternoon showers in the area. Image: The pitch offered some assistance to bowlers in the 1st ODI

Despite the sub-par score, there were some glimpses of form from the visitors that could be built on. Five of the top six batters made double-figure scores - with Paul Stirling, Gareth Delany and Balbirnie looking the most comfortable. Lorcan Tucker played a steady role for his 31, and Mark Adair mixed patience with the occasional aggressive shot when the ball was there to be hit. Shot selection and rotation of strike will be two areas that the batters will work on before the second ODI, with James McCollum waiting in the wings if coach and captain want to make a change in the line-up.

The bowlers were patient given the evolving pitch conditions as the lights took over, however, they were punished clinically when they overpitched or strayed onto the pads. Boyd Rankin found a rhythm and line that troubled a number of opposition batters, while Simi Singh and Andy McBrine toiled well with off-spin against a predominantly left-handed batting order. Indeed, the left-handed nature of the West Indies batters was the reason captain Balbirnie pointed to post-match as the reason he didn’t turn to Gareth Delany’s leg-spin. Given the quality in the Windies batting line up, it will come back to Mark Adair’s comment before the series: “…regardless of whether the pitches for the internationals are flat or whether they’re a snake pit, the top of off stump doesn’t move and that’s where we need to try and be as accurate as we can.”

The West Indies will be pleased with their bowling performance during the first ODI, particularly the penetration of Alzarri Joseph and the spin options offered by Roston Chase and Hayden Walsh. Despite their successes though, the Irish top order still showed that waiting for the right ball to hit paid dividends. The Windies attack on home soil is formidable but has shown it can be combatted.

The Windies batting unit received a mixed scorecard – Evin Lewis aside. Shai Hope was put out there as the pre-series form batsman, but he – as well as a number of colleagues – showed that a bit of extra bounce could be effective against their naturally assertive batting style. Indeed, Shimron Hetmyer particularly demonstrated that the Windies batters themselves could suffer from impatience on the slow pitch and instead they should look to the effectiveness of Lewis in waiting on the bad ball or playing traditional cricket shots to great effect. Stirling has looked in good touch since arriving in the Caribbean. His 64* in the first match was a continuation of the bullish form he displayed with the bat throughout 2019, while his brief 15 from 21 balls last night showed enough for fans to be hopeful of him making a meaningful contribution in this 50-over series. Stirling had such an outstanding 2019 that it is often a standard that fans expect every time he walks out to bat, but the confidence is not misplaced as his presence at the top of the Irish line up always adds a spark of interest in fans, and a sense of concern in opposition bowlers if he gets on top of them early.

While Hope missed out on his home ground last night, he remains the biggest potential batting threat to the Irish bowlers. His form is sparkling and his ODI record is outstanding, averaging 52.06 and scoring 8 centuries and 15 fifties in 68 innings speaks to a highly effective opener who can build an innings at the top of the order.

Balbirnie’s post-match comments summed up Ireland’s attitude: “They bowled well, but I think we still have a lot of areas to work on with the bat. There’s no reason why we can’t turn it around and look to put in a much better performance in the next game”. Ireland isn’t here to make up the numbers, and there is confidence within the squad that they can be competitive. Game One demonstrated that the Irish batting will likely be better for the hit out, but will need to concentrate on building partnerships. Whether setting a target or chasing a target, Game Two may be determined by the ability of the Irish top and middle order to build those partnerships and frustrate the Windies bowling attack.

Join us for the second One-Day International of the series on Thursday at the same venue.