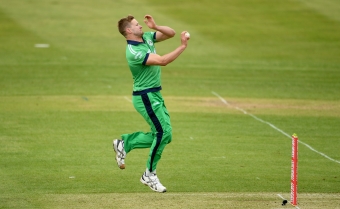 Barry McCarthy made vital contributions with ball and bat

GRENADA - The third men’s One-Day International between West Indies and Ireland - you would expect - cannot possibly hope to outdo the drama of the last game. Regardless, fans can tune in from 9am (local time) at the National Cricket Stadium, St. George’s, Grenada on Sunday 12 January 2020.

This match will be broadcast on Sky Sports Cricket in Ireland / UK.

The first ODI saw a below-par Irish performance, however, the second ODI was a cricket classic. Two sides battling it out over 100 overs and the result coming down to (literally) a matter of millimetres. West Indies’ one-wicket win off the second-last ball was heart-breaking for Irish fans but will be remembered for a long time as the one that got away. Despite the devastating loss, captain Andrew Balbirnie remains upbeat in his assessment of the match, saying:

“The squad are hugely disappointed, we left pretty much everything out there. Unfortunately, we didn’t perhaps get the rub of the green at the end, but I can’t fault the lads and the effort they put in. That was what I asked from them before the game, and between innings - to go out there and make it as hard as possible for the West Indies to chase the target and I think we did that.”

Conditions in Grenada are expected to be similar to nearby Barbados, tops of around 30 degrees with a chance of occasional showers on the day.

The continued improvement of the batting and bowling unit in the second ODI will please fans, with a more determined and disciplined display reaping rewards and exposing some weaknesses in the home side’s line-up. The Irish bowling unit will be largely pleased with its execution of tactics, in particular, Barry McCarthy’s energising spell (2-28 from 10 overs), Simi Singh’s knack of taking wickets when it mattered and Boyd Rankin’s line and bounce caused issues for Windies batters for the second straight match. The third match will require more disciplined bowling, as the flamboyant home batters may look to attack more freely given the series has been sealed.

The batters again showed promise but lacked the one big innings the side could build around. Paul Stirling (63) was most likely, while Kevin O’Brien and William Porterfield showed what they were capable of, but in the end, it was down to a late flurry of runs from Barry McCarthy (17*) that pushed the innings from average to defendable. The key is partnerships - Ireland has struggled to build these and if they can find the knack then it will serve them well in building or chasing a target.

The West Indies are not pleased - various commentators have questioned the depth of bowling and the technique with the bat, particularly not forcing shots to balls that are not there to be hit. Alzarri Joseph is a star, of that there is little doubt, and Sheldon Cottrell provides a danger that the Irish batters have struggled to combat, but the Irish batters had periods during the second ODI of looking reasonably comfortable against the rest.

The Windies batting unit again received a mixed scorecard. Shai Hope found form but fell when he was looking to accelerate his innings, while Shimron Hetmyer again failed to show fans the immense talent he possesses with another shot that belied his usual judgement. Kieron Pollard was in monster-hitting form - putting two balls on the grandstand roof - while Nicholas Pooran looked in good touch, but both fell to balls of good line and length. This discipline is the key to Irish bowlers building pressure and frustrating the home batters.

Balbirnie will be key to the fortunes of the Irish side in the third ODI, not just for his batting but also for his captaincy. He will be looking to contribute a score of note in the series, but almost more importantly will play a key role in keeping his troops focussed, energised and disciplined with the ball and in the field. His tactical decisions with the bowling unit and field placings were very positive, and his calmness in the field during the latter over dramas will be vital again to ensure a good finish to the series.

An obvious choice, with two identical returns of 4-32 - but the confidence he built with the ball even seemed to flow through to his batting in game two, demonstrating that he may have more than just one string to his cricket bow. The Irish batters will need to be patient and expect to deal with more shorter-pitched balls.

Ireland’s discipline holding. The West Indians may feel a little more relaxed and attack-minded in the third game now that they have won the series, so Ireland’s discipline and patience will again by key. Also key will be the extent to which the Irish batters can be patient and build solid partnerships.

The skipper spoke from the team hotel this morning before the side flew to Grenada for the third ODI on Sunday.