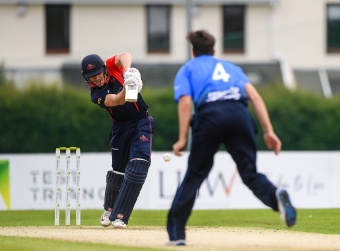 Can the Knights knock the Lightning off their perch?

After two matches were lost due to bad weather, the third match of the Test Triangle Inter-Provincial Cup is set to get underway on Thursday morning at Comber when the Northern Knights take on the Leinster Lightning (10.15am start).

This match will be livestreamed and livescored here.

If the weather is kind, this will be the first action of the 50-over competition for the 2020 season - following on from the Inter-Provincial Trophy, which was won by Leinster Lightning for the sixth time.

Lightning are defending champions in this competition and have won it for the past six seasons, but the Knights will be keen to challenge for their second 50-over crown (their first win was in 2013).

The Knights made a few changes after the transition from their T20 squad to their 50-over squad with Marc Ellison, Neil Rock and Matthew Foster all coming in for the Cup.

Ellison finished the 2019 season as second-highest run-scorer (208) behind Ireland captain Andy Balbirnie and he will likely once again open the batting alongside James McCollum.

The Lightning had a strong IP20 competition and reclaimed the trophy from the Knights who won it in 2019. With one title in the bag, the Leinster side will be keen to get their 50-over campaign off to a good start with a victory in Comber.

Jack Tector returns to the Lightning set-up after captaining the Munster Reds in the IP20 competition, and will likely open with Stephen Doheny. Curtis Campher will be buoyed by his 4-wicket haul for YMCA in last weekend’s Clear Currency All-Ireland T20 Cup and look to recapture the 50-over form he displayed against England last month.

Northern Knights – Ruhan Pretorius
Pretorius was in frightening form in his last outings for club side North Down as he smashed 120* from 56 balls (seven fours, nine sixes) in a league semi-final victory over Instonians and followed it up with 47 the next day as the Comber side defeated Waringstown to be crowned champions. The 29-year-old made his Knights 50-over debut against the Warriors last summer, marking the occasion by scoring 96 at the top of the order. It is yet to be seen where he will bat this season but Pretorius also has an important role to play with ball in hand as he looks to back up the likes of Mark Adair and Graeme McCarter.

Leinster Lightning – Simi Singh
Singh regularly pops up with a vital wicket or much-needed runs at key moments. He has made his impact felt in the T20 format, most notably his 3-15 from 4 overs and 39* against the Knights at Pembroke was a key contribution towards the Lightning fending off the Belfast side’s title challenge. Singh’s all-round strengths - batting, bowling and fielding - make him an important cog in the Lightning machine. Like his clubmate Campher, he will also be buoyed by YMCAs successes at the national level.

These are two sides packed with international talent, and weather permitting, will no doubt provide a highly competitive fixture for the fans to enjoy.

The Knights will be looking to restore pride after their loss to the Lightning at Pembroke recently, and the subsequent concession of the T20 title, so expect a side up for the fight on home turf.

Harry Tector has a good record with the bat against the Lightning and performed admirably in this format of the game against England - expect him to be hungry for runs if he gets a decent chance.

The Lightning side bats deep and can be expected to withstand an early onslaught, so the match may well come down to who comes out on top in the battle between the Knights bowlers and the Lightning’s top and middle order.

A proverbial fly in the ointment is that there is a strong indication Mark Adair may not be able to bowl, meaning the onus will be on the likes of Shane Getkate, David Delany and Graeme McCarter to lead the line.