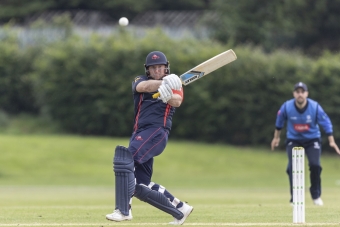 Gary Wilson batting against the Lightning in 2019

Tuesday’s victory over the Munster Reds leaves Leinster three points clear at the top but if the Knights were to prevail, they would leapfrog their Dublin counterparts and put themselves in pole position to retain the crown they won in 2019.

Both sides enter the encounter unbeaten after Lightning picked up two victories over the Reds and the Knights successfully navigated their way past the North West Warriors twice.

Their first clash, which was scheduled to be played in Comber on August 25, was cancelled due to bad weather and it leaves even more hanging on this fixture.

The last time the two sides met, it was the Knights that ran out victors by eight runs at the same venue as Thursday’s clash but Lightning have tended to dominate in the shortest format, winning the other four times they have come up against each other since 2017.

After some overnight rain in the area, the sun is set to shine over Sydney Parade on Thursday afternoon for what is the biggest match of the 2020 campaign so far.

Left-arm seamer James Newland made his Lightning debut in Tuesday’s victory over Munster, picking up a wicket with his second ball as Jeremy Lawlor edged behind to Lorcan Tucker.

He is set to be involved again with the Lightning going in with an unchanged side which is packed full of international quality.

Each of the six Lightning bowlers picked up at least one wicket against the Reds with captain George Dockrell leading the way, ending with figures of 2/12.

The Knights have suffered a blow with Graeme McCarter, who has picked up four wickets in the first two games, unavailable for their trip to Dublin.

David Delany bowled with great pace on his first appearance of the Inter-Provincial season and will have to take on more responsibility with McCarter absent while Josh Manley is set to come into the side.

Mark Adair picked up figures of 4-14 on Tuesday and will have a big role to play while James McCollum, fresh from 79* off 53 balls, will be looking to go big once again. Image: Lorcan Tucker reverse sweeps in his innings of 28* against Munster Reds

Leinster Lightning – Lorcan Tucker
Ireland international Tucker put in a fine all-round performance against the Reds on Tuesday and dealt brilliantly with the pressure of Leinster being 10/2 to lead his side home to a comfortable seven-wicket win. The 23-year-old finished on 28* with one four and two sixes while also taking a catch and picking up a stumping off the bowling of Dockrell behind the stumps. He has been in good form for his club Pembroke, scoring 45 from 37 balls against Dublin University at the weekend, and it suggests Tucker could be on the verge of returning to the top of his game.

Northern Knights – David Delany
Delany only picked up one wicket in his first match back at this level on Tuesday but that doesn’t tell the full story of his performance. The 22-year-old, who is more than capable of hitting and surpassing the 90mph mark, bowled a fiery four-over spell to finish with figures of 1/20 and it was his efforts that helped build pressure on the Warriors in the middle overs, allowing others to have success of their own. Delany is such an exciting talent and the Knights will be looking for him to step up once again in this must-win game.

Keys to the contest

The average first innings score at Sydney Parade sits at 160 in Inter-Provincial Twenty20 matches with the highest coming in at 207, so it’s clear that this is a ground where scoring big runs is a real possibility and perhaps even a necessity.

After winning all three of their matches at the venue on the way to a first piece of silverware in six years, the Knights will enter with confidence and it was the strength of their batting unit that helped them to two of those victories, scoring 167/6 against Munster and 138/5 in just 13 overs against Leinster.

It is going to be crucial to make the most of the opening powerplay, which both teams have done well this season.

Both sides will also have to deal with the pressure of what is on the line with the Knights knowing they must win while Leinster are eager to regain the title they lost last season.

The team that can deal with that pressure and the circumstances best will prevail in what is set to be a fantastic game between the title-chasing sides.