May 3rd 2021 by Craig Easdown | International 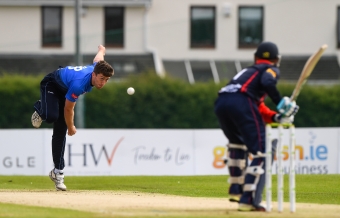 After a dominant display against the North West Warriors on Saturday, Leinster Lightning are looking to continue their winning start when they host the Northern Knights this Tuesday at Pembroke Cricket Club.

The Lightning’s six-wicket win was an announcement to their three opponents that, despite the squad changes in the off-season, they are still a force to be reckoned with. Nigel Jones’ team fought hard with both bat and ball, and - perhaps the most important aspect of the win - did not just rely on the experienced stars for the win, with Jamie Grassi’s 82 emblematic of the depth that the province can call upon.

The Northern Knights admitted that they underperformed against their own expectations in 2020, and will look to assert their credentials with a good performance in their first appearance in 2021. With Paul Stirling and James McCollum at the top of the order, and exciting players like Mark Adair, Harry Tector and new man Luke Georgeson to call on, the Knights will feel they are more than a match for the defending champions.

Rain may play a part in the day’s proceedings though, with a 60% chance of rain and tops of 11 degrees expected, the conditions will be challenging for both bowling units, and a close result expected.

The Lightning are missing Andrew Balbirnie, Josh Little and Rory Anders once again, but Head Coach Nigel Jones will be satisfied that his side bats deep and has an impressive bowling pedigree. When key wicket-taker Barry McCarthy fires as he did on Saturday with four wickets, and Simi Singh delivers yet another economical bowling performance drying up the runs at the other end, the Lightning bowlers are a tough side to get on top of in home conditions. And of the batters? They were tested by the Warriors bowlers, but came through with flying colours.

Head Coach Simon Johnston said: “The guys worked hard over the winter and in pre-season to ensure that they are ready to go come the first ball tomorrow. There are a few new faces in the squad this year and I have no doubt that they’ll be itching to show what they’re made of”. This confidence should be on full display tomorrow under new captain Harry Tector. Tector has an attacking mindset, and will want the likes of Stirling, McCollum and Adair to play with freedom. And with the likes of Ruhan Pretorius, Neil Rock and Georgeson to call upon, the Knights look ready to take battle to the Lightning. Image: Flashback to 2020 - George Dockrell cuts the winning runs against the Knights

Leinster Lightning – George Dockrell
George Dockrell may - for Irish fans - be a well-known quantity, with his left-arm off-spin bowling a regular feature in Irish teams for the best part of the last decade. However, what has really come to the fore in recent times is Dockrell’s batting. An all-rounder at club level, Dockrell has always been a handy batter at international level. But, of late, Dockrell has upped his game with the bat, playing several crucial innings for Ireland, and piling on the runs for the Lightning. His 51* against the Warriors was overshadowed by Grassi’s match-winning 82, but it was no less important in taking the game away from the North West side. Coming in at 92-3, and with the Warriors looking to get back into the game, Dockrell came in and confidently struck five fours and a big straight six to push the Lightning’s innings towards the victory target, bringing up his half-century with an attractive boundary through mid-wicket.

Northern Knights – Ruhan Pretorius
It would be easy to suggest that Ireland Men’s Player of the Decade Paul Stirling is the key Knight - and he may well be - but it may be the all-round potential of Pretorius that tilts the result the Knights’ way. Pretorius showed with both bat and ball for the Ireland Wolves in Bangladesh that he has what it takes to succeed at this level in 2021. Pretorius hit an impressive half-century against the Lightning at Comber last season, but perhaps under-performed with the ball. He will be keen to hit the ground running in this year’s competition, given he is less than a year from qualifying to play for Ireland.

Expected damp conditions mean that disciplined bowling will be key. While the Lightning dealt confidently with the Warriors attack on Saturday, it will be a different challenge against the Knights. Adair, McCarter, Georgeson and Pretorius provide a quartet of quality seam options to captain Harry Tector, while spinner Ben White will be keen to show his move north to play his club and provincial cricket is paying dividends. The key battle may well be who can dominate between the Lightning batting unit and the Knights bowlers. It should be a fascinating encounter.