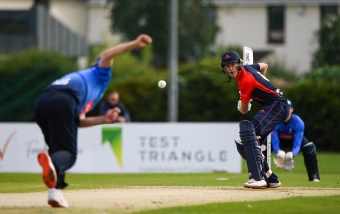 Harry Tector batting against Leinster Lightning in the IP20 competition

The Northern Knights will finish their Test Triangle Inter-Provincial Series season on Saturday when they travel to take on Cup champions Leinster Lightning at Malahide (10.15am).

Lightning continued their remarkable run of success by collecting a seventh consecutive Inter-Provincial Cup with a bonus point victory over North West Warriors at Bready on Tuesday.

Jack Tector (76*) was once again in fine form as he put on an opening partnership worth 132 with Kevin O’Brien (51) to help guide the Dubliners to a comfortable 62-run triumph (DLS).

The Knights have had two of their three 50-over matches cancelled due to bad weather while they lost the one they did manage to play by 91 runs to Lightning on September 17, so they will be looking to get some revenge and end their season on a high.

Shane Getkate (73) and Ruhan Pretorius (50) were impressive in the middle order during that defeat at The Green in Comber and they’ll likely have another crucial role to play if the Knights are to come out as victors.

Lightning have won four of their last five meetings in this format but the Knights will be carrying memories of some recent success into this fixture after a seven-wicket triumph at Pembroke in June 2019.

Despite a typically chilly September day in Ireland, the sun is forecasted to shine for the majority of proceedings at Malahide.

It has been quite the week for opening batsman Jack Tector, who captained YMCA to Clear Currency All-Ireland Twenty20 Cup glory last weekend before it was his innings that secured another piece of silverware for Leinster, and he will be looking to go big once again.

Tyrone Kane missed the Warriors victory through injury but it is hoped that the Irish international can take his place in the squad this time round.

North Down leg-spinner Carl Robinson could be set to make his Knights debut after being named in the 12-man squad that will make the trip down to Dublin.

He impressed at club level in Twenty20 cricket during the 2020 season while Neil Rock will also be hoping to make his first Knights appearance of the season. Image: Curtis Campher hits out against the Munster Reds

Leinster Lightning – Curtis Campher
It hasn’t been the easiest start to Inter-Provincial life for Ireland’s latest breakout star Campher but he has been showing signs that he has now adapted to conditions and is ready to put in a string of performances for Leinster. The 21-year-old picked up four wickets against the Warriors earlier this week, which included the three important scalps of Will Smale (45), Graham Kennedy (46) and Graham Hume (36) who were all settled at the crease, proving his ability and versatility with the ball. Campher scored 26 against the Knights last time out and it’ll be his aim to contribute even more in both disciplines as time goes on.

Northern Knights – Marc Ellison
Ellison made his first Inter-Provincial appearance of the season when he opened the batting alongside James McCollum in the previous game and this is a format that he thoroughly enjoys. The 33-year-old finished the 2019 Inter-Provincial Cup season as the second-highest run-scorer, notching 208 in his six innings at an average of 34.66 and high score of 87 with Ireland captain Andy Balbirnie (350 runs) the only man that could boast a better return. The CSNI batsman will be looking to round his season off with a big score and he is more than capable of doing just that.

The Knights will need to bowl slightly better than they did in Tuesday’s defeat as they allowed Leinster to get past the 300 mark, which is never an easy target to chase down.

They are certainly capable of doing that with Graeme McCarter suited to the conditions and he will be backed up by the likes of Mark Adair, Ruhan Pretorius, David Delany and potential debutant Carl Robinson.

It was their bowling unit that was mainly responsible for their last victory over Leinster in 2019 with Adair and McCarter combining to leave their opponents sitting on 4-3 before three Shane Getkate wickets stopped all Lightning momentum.

Lightning are so dangerous due to the ability for their side to bat right down the order with eight batsmen going past 20 against the Knights recently, including a late flurry from Tyrone Kane (30 from 14) and captain George Dockrell (24 from 11).

Leinster head coach Nigel Jones will be looking for more of the same from his side as they look to take another step towards an unbeaten season.