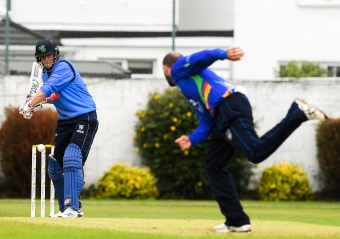 Can the Lightning complete a clean sweep?

The 2020 Test Triangle Inter-Provincial season will come to a close on Monday when Leinster Lightning host North West Warriors at Malahide (10.15am).

In what has been a shortened campaign where temperature checks, social distancing and elbow bumps has become the ‘new normal’, credit must go to sponsors, players, officials and beyond for the product they have produced this season.

George Dockrell’s side are currently unbeaten through this campaign and they’ll be looking for it to finish that way when the Warriors make a trip down to Dublin.

It was against the Warriors last Tuesday when Lightning confirmed their status as champions in the 50-over format with a 62-run (DLS) triumph at Bready with Curtis Campher (4/46) starring with the ball before YMCA team-mate Jack Tector (76*) finished off the job alongside Kevin O’Brien (51).

This season hasn’t quite gone to plan for the North West outfit with half of their 10 matches across two competitions cancelled while they have been on the losing side in the other five that have been contested on the pitch.

The final game offers them one last chance to put that right and end their season on a high as well as an opportunity to gain some momentum heading into the off-season before going again in 2021.

There is a chance of some morning rain at The Village and it’ll certainly be cold, but the current forecast shows a clear afternoon which will hopefully allow the two teams to finish their respective campaigns on the pitch.

Lightning recorded a three-wicket victory over the Northern Knights on Saturday at the same venue and it isn’t expected their squad will change too much from that triumph.

Fast bowler Conor Olphert is set to make his first Inter-Provincial appearance of the season after recovering from an injury that has kept him out of action.

David Rankin, who missed the previous game against Leinster, remains on the sidelines and isn’t available for selection. Image: Simi Singh has been a key player for the Lightning this season

Leinster Lightning – Simi Singh
Singh has once again underlined his quality during this Inter-Provincial campaign and has the chance to finish on top of both the runs and wickets tables. The Ireland international has currently collected more wickets (7) than anyone else across their three Cup matches while he has also scored 89 runs in two innings, which puts him 20 behind team-mate and leader Stephen Doheny. It has been a superb season for Singh, who also finished with most wickets (8) in the Twenty20 Trophy, and he will be looking to round it off on a high against the Warriors.

North West Warriors – Will Smale
Smale has been batting at number three in the 50-over series and the 19-year-old showed what he is capable of by scoring 45 against a very strong Lightning attack last time out. Having turned out for Ireland U19 last summer following a move from Australia, Smale’s potential is there for all to see and he is still learning and improving at Inter-Provincial level. Also keeping wicket for the Warriors, Smale will have an important role to play if the Warriors are to finish with a victory.

Lightning continued their run of success against the Warriors last week at Bready but there were some positive signs for the home side.

Nathan McGuire (34), Will Smale (45), Graham Hume (36) and Graham Kennedy (46) were all in the runs and did their best to drag the Warriors up to a respectable total, but 205 was never likely going to be enough and so it proved, even if the rain did arrive to bring the game to a premature end.

Lightning captain George Dockrell, who has finished two of the last three completed campaigns as highest wicket-taker, is a class act and proved that once again by collecting the wickets of his international team-mates Stuart Thompson and Andy McBrine to halt any sort of momentum the Warriors were looking to create.

His spin could once again be key while the likes of Curtis Campher, Peter Chase and Tyrone Kane will enjoy bowling in the current conditions.

The Warriors will be looking for their opening duo of Craig Young and Graham Hume to strike early this time around as it has often been the first wicket partnership that has set Lightning up for success against them in recent meetings.