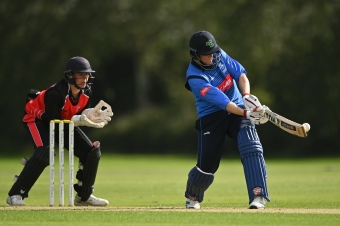 Kevin O'Brien batting in the last match against the Reds

The Leinster Lightning will be looking to repeat their dominant first-round performance over the Munster Reds, however, the Reds will be hoping that home ground advantage will be a factor as top-level action returns to The Mardyke in Cork.

The Lightning have had the start to their T20 campaign that they would have dreamed of – two convincing wins and great form displayed by a number of their key players. Kevin O’Brien’s incredible knock of 82 off 37 balls against the Warriors in the last match followed on from his 45* off 27 balls against the Reds in round one. Perhaps only the fact he landed one of his sixes through his own car’s back window overshadowed the fact that his form is ominous and may again be a factor against the Reds attack.

The Munster side were disappointed that last time out – well, not quite out – rain forced the match against the Northern Knights to be abandoned.

The Mardyke’s groundsman Matt Reed has prepared a great looking pitch, but with overnight rain expected in Cork, and chance of showers throughout the morning, both sides will hope that precipitation will not decide the outcome of the match.

Reds head coach Ted Williamson has a squad of young talent at his disposal and they have what it takes to cause problems to any team in this competition. Building confidence will be key after their first match-up against the Lightning in round one, but this young side has both the willingness to improve and the potential to bounce back.

Welsh-born Jeremy Lawlor showed glimpses of what he can offer in the Northern XII v Southern XII match prior to the start of this Series, and looked quite comfortable in his brief innings of 12 against a top-class Lightning attack. Expect him to show better form with the bat as the competition progresses.

Lightning head coach Nigel Jones has been forced to make one change to the squad that was selected for the last match against the North West Warriors last Thursday, with Josh Little ruled out with a hand injury. Malahide’ left-armer James Newland comes in to provide pace bowling options for captain George Dockrell.

Irish international Barry McCarthy is still not available for selection as he hasn’t recovered from the injury picked up in the ODI series against England. Munster Reds – Jack Tector
Run out without facing a ball in game one, then a washout in game two, has frustrated the Reds’ captain. Tector knows the challenge is a big one, but is keen to lead from the front and provide a solid platform at the top of the order for his young side. His 47 from 33 balls in the match against the Lightning in 2019 will be the performance he will seek to repeat, as he looks not only to impress the teammates and coaches at provincial level, but to remind national selectors of the talent, and the potential he could offer at a higher level.

Leinster Lightning – Simi Singh
Completely overshadowed by O’Brien’s stellar innings in the last match, Singh showed his all-round value to the Lightning with a run-a-ball 25* and then followed up with 3-11 with the ball. This is no one-off – Singh has repeatedly stepped up when his provincial side has needed him to, particularly having the knack of picking up middle-order wickets at an economical rate to constrict the opposition is the middle overs. Singh has demonstrated this too on the international stage – most notably in the T20I squad when he came into the side against Namibia in the 3rd Place Play-off at the T20 World Cup Qualifier late last year and claimed a Player of the Match-winning 3-25.

The toss will be key to the outcome, as the Reds will likely look to build confidence and establish a foothold in the match through batting first. The Lightning’s top order is full of confidence, even without the presence of the Vitality Blast-bound duo of Gareth Delany and Andrew Balbirnie. Captain George Dockrell will be confident of his batters no matter whether they are setting or chasing the target – but possibly the Reds batting line up will feel they have something to prove after being bundled out for 76 in the last match. Expect a more determined and gritty performance in home conditions of The Mardyke, with Head Coach Ted Williamson - renowned for his supportive leadership - ensuring his chargers put the last match out of their minds and go into this encounter with belief.