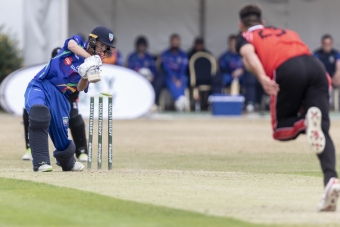 The Reds upset the Warriors in 2018

Munster Reds and the North West Warriors will meet for a Test Triangle Inter-Provincial Series double-header on Thursday at North County (10.15am and 2.30pm).

Both sides are without a win in the 2020 competition after the Reds lost out twice to Leinster Lightning while the Warriors have suffered two defeats to defending champions Northern Knights.

They have met three times in the Twenty20 format since 2017 with the Warriors winning two but the Reds picked up a historic first Inter-Provincial victory in July 2018 as they chased 163 with three overs to spare at Pembroke.

Ruadhan Jones and Senan Jones are the only two players that were involved in that triumph that will be present this time around, but they are again surrounded by a plethora of young talent in the likes of Neil Rock, JJ Garth and captain Jack Tector.

The Warriors were only narrowly edged out by two-runs (D/L) on the opening day against the Knights but Tuesday’s defeat was more emphatic as they went down by eight wickets at The Green in Comber.

They have the talent and experience to turn their season around and it’ll be important for them to gather some momentum and put in a couple of good performances heading into the rest of the Inter-Provincial Series.

Both teams have had their season impacted by bad weather but it looks like the sun should shine at North County on Thursday, which will hopefully allow for two exciting games of cricket.

Led by Jack Tector, the Reds have had a consistent squad in terms of personnel throughout the Inter-Provincial Series.

They have a settled top-order that is full of quality with Tector and Jeremy Lawlor opening followed by Cormac McLoughlin-Gavin, Neil Rock and Tim Tector, and it’s surely only a matter of time before they fire and show what they are all capable of.

JJ Garth, more renowned for his leg-spin, has showcased his all-round ability by top-scoring in both games against the Lightning.

The Warriors welcomed Boyd Rankin back into their squad for the first time this season against the Knights and although he didn’t pick up any wickets, it’s clear the impact he can have for the rest of this season.

Ryan Hunter was also making his first appearance of the 2020 campaign and looked impressive on his way to top-scoring with a contribution of 37.

William Porterfield also looked in fine touch on Tuesday, reaching 26 from 17 deliveries before he was caught off the bowling of Mark Adair and will once again have a big role to play in the top-order.

Munster Reds – Jeremy Lawlor
24-year-old opening batsman Lawlor hasn’t had the best start to life in Inter-Provincial cricket but there is no doubting his ability and it won’t be long before everything starts to click for him. He came through the ranks at Glamorgan, playing in two County Championship games, five One-Day Cup matches and six T20 encounters before leaving the Welsh outfit in 2019. Lawlor joined Phoenix ahead of the 2020 campaign and he is certainly one to keep an eye on throughout the remainder of the Inter-Provincial Series and beyond.

North West Warriors – Andy McBrine
McBrine has been a key figure in this fixture over the last few years, scoring 115 runs and picking up five wickets in three Twenty20 contests against the Reds. He blasted 52* from 25 balls in their 25-run win at Eglinton back in 2017 and he will want to put in another couple of good showings to help inspire his side to victory. Although they went down by eight-wickets on Tuesday, McBrine was impressive with the ball, finishing with figures of 1-15 from four overs and chipped in with 22 before he was caught trying to up the run-rate, further underlining his skill in both disciplines.

The Reds will have to improve on the batting front if they are to pick up their first victory of the season and a lot of that will fall on the shoulders of the top-order.

Leinster’s attack is full of international quality so it isn’t an easy task to score a big total against them, but the Reds have lost too many early wickets and it has meant they are unable to set a platform from which to attack.

It’ll be just as tricky for them against the Warriors with the likes of Craig Young, Graham Hume and Boyd Rankin all charging in at Balrothery but they will have to find a solution and have two opportunities to do so.
Warriors head coach Ian McGregor will also be looking for more from his batting unit after they failed to push on from the good position they found themselves in against the Knights on Tuesday.

They were 90/3 heading into the 15th over but were bowled out for 115, although there were some positive signs with multiple batsmen getting starts.