May 5th 2021 by Craig Easdown | International 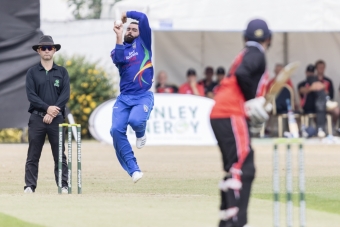 Stuart Thompson bowls for the Warriors

The Munster Reds make their Inter-Provincial Cup debut with a tricky visit to Eglinton to take on the North West Warriors - with the Warriors still smarting after defeat in their first match last Saturday to Leinster Lightning.

The Warriors’ loss to the Lightning last weekend may have been a disappointing start for the North West side, but it was a match in which they can draw a number of positives to build on for the season. Most of the top seven batters got starts (although admittedly no player capitalised on that), and the bowlers toiled earnestly. While they didn’t take the wickets they needed, neither were they overrun by an experienced Lightning outfit.

How the Warriors will fare on home turf will be a good barometer of where Gary Wilson’s squad is in terms of its development in 2021, so we should expect an improved performance all around today.

And making the trek to Eglinton to face the Warriors is the new side to this competition - the Munster Reds. Much has been written about the Reds during the off-season, but despite that, one thing is consistent - fans want to see a competitive and viable fourth team in the competition. But ‘viable’ and ‘competitive’ may undersell the talent that the Reds bring to Eglinton. While a young squad on the whole, there will be much interest in seeing how the likes of Curtis Campher and PJ Moor get on, as well as Tyrone Kane in his new captaincy role. With Aaron Cawley getting early season plaudits from his new skipper recently, and Fionn Hand making the move from Leinster to Munster, this Reds outfit is not just here to make up the numbers.

With overnight showers in the North West and a 70% chance of some rain, conditions may well suit the home side - but can they convert that advantage into victory on the pitch?

The Warriors named an unchanged squad from their first match, and Head Coach Gary Wilson will once again look to his experienced players to lead the charge. Andy McBrine’s 38 batting at number three demonstrated that he is keen to lead from the front, while the likes of Craig Young, Stuart Thompson and Graham Hume impressed with the ball on Saturday. In fact, observers remarked that last match was the fastest they had seen Craig Young bowl, and while he went wicketless his 0-31 from 10 overs had a menacing edge throughout. Stephen Doheny at the top of the order gave the Warriors are real spark early on - exemplified by his scoring 29 of the opening 30-run stand with William Porterfield - and that brief 22-ball innings though may drive his hunger for more runs against the Reds.

New captain Tyrone Kane admitted he had only recently met a number of his squad for the first time a few weeks ago, but he was full of praise for the talent he saw in the nets and during warm-up games. Curtis Campher will be keen to impress after a challenging tour to Bangladesh with the Ireland Wolves, but his bustling displays last year with both bat and ball show he is adapting well to Irish conditions. PJ Moor is another interesting storyline, and came off the end of the Zimbabwean season in March scoring a 73 and 85 in his second last first-class match for the Tuskers. Can he translate that form to Irish conditions?

The captaincy of Tyrone Kane at this level has been untested, but if his captaincy is like his batting, we can expect to see some attacking and innovative moves on the field. Image: Flashback to 2020 - William Porterfield on the attack

North West Warriors – Craig Young
Craig’s efforts in the UAE in January with Ireland were impressive, and his start with the ball against the Lightning last Saturday was threatening. His ability to generate pace and varying bounce made the Lightning batters uncomfortable, and on home turf he may find that extra ounce that gets him amongst the wickets on this occasion. Young may have had an in-and-out few years for the international squad, but this last 12 months he has shown a greater consistency and added a few extra yards of pace that has seen him almost first name on the teamsheet. Expect him to bowl well if conditions are blustery, and make good use of any variable bounce in the pitch.

Munster Reds - Curtis Campher
It may sound an obvious choice, but the stats don’t lie in Campher’s case regarding his performances in the Inter-Provincial Cup in 2020. 101 runs at 50.50 with the bat in three innings, and eight wickets at 16.26 with a best of 4-46 with the ball. After a stellar 2020 at international and domestic level, Campher won’t want 2021 to be the equivalent of that “difficult second album”, and will know there is a big year ahead at national and provincial levels. While still only 22 years old, Campher bats with maturity and bowls with guile - expect him to be leading the line for the Reds this season. But will he need some time in the middle to find his rhythm first?

On paper, the Warriors have the experience and the talent to win on home turf. But games aren’t played on paper, they are fought out on the field where many variables can affect an outcome. This encounter may well revolve around who can come out on top in the battle between the Warriors’ top order batters and the Reds’ bowling unit. If the likes of Porterfield, Doheny and Stuart Thompson can find their range, it will be a tough challenge for the Reds relatively inexperienced bowling unit to contain the home side. Regardless of whether batting first or second, expect the Warriors to go hard from the outset to try and dominate the visitors. Whether or not the Reds’ bowlers can withstand the assault may well determine the winner.