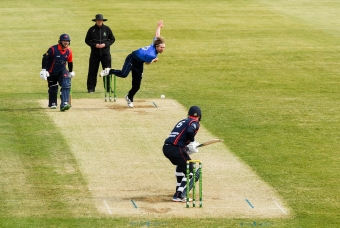 Barry McCarthy bowling in the match on 4 May

The Northern Knights will be keen to avenge their 70-run loss to Leinster Lightning 10 days ago, and are expected to be a far more competitive outfit on home turf.

The Knights’ rain-affected 70-run (DLS) loss to the Lightning on 4 May was a disappointing start for the Northern side, having let the Lightning wriggle out from being 109-4 in the 33rd over to post 251-6 from 50 overs. The main destroyer that day was the rejuvenated George Dockrell who hit a remarkable 100* from 84 balls, then seeing Paul Stirling and Harry Tector back in the pavilion with just 40 on the board. From there, the Knights struggled to mount a credible run chase and finished on 163-9 (with one batter absent due to injury).

Head coach Simon Johnston will likely have considered it ‘one that got away’, but that result may serve to fire up his squad for the return encounter.

For Johnston’s counterpart Nigel Jones, the season has started as well as could be expected, with two solid wins against the two northern provincial teams, and he has Andrew Balbirnie and Josh Little returning to the squad.

With overcast conditions and periodic showers expected, the Comber pitch may present tough batting conditions early, so expect the toss-winning captain to bowl first and look to put the squeeze on through early wickets.

The Knights named a 13-man squad for this encounter, with James Cameron-Dow joining the 12 players that travelled to Dublin on the 4th. Graeme McCarter will have his tail up after an excellent performance for the Ireland Wolves mid-week taking 9 wickets at 10 runs apiece, and Paul Stirling will be keen to get time in the middle ahead of the World Cup Super League matches in June.

Simon Johnston said: “Despite the result in the opening match against Leinster Lightning, there were positives that we took away from the game. We’ve been working hard since and hopefully things go our way in the upcoming games. It’s great to have James (Cameron-Dow) back in the squad. He brings a wealth of experience with him and offers us something different with the ball. It has been fantastic to see so many of our squad away with the Ireland Wolves this week. They will have learned so much and hopefully they can apply that new knowledge when playing for MTB Northern Knights in the future.”

The Lightning will be bolstered by the return of Balbirnie and Little, and buoyed by their performances so far. The defending champions are in red hot form and had several players involved with the Wolves mid-week. Dockrell’s batting form continued at Oak Hill, and Peter Chase’s bowling played a pivotal role.

Nigel Jones said: “We’re looking forward to welcoming both Josh (Little) and Bal (Balbirnie) into competitive action. Josh has been very impressive this week at training, while Bal, well we know the quality he will bring to the group. We’re looking forward to welcoming them both back for Sunday’s fixture and putting in another strong performance.” Image: George Dockrell on the attack

Northern Knights - Mark Adair
After the last match, Adair will be keen to build on his decent personal start to the season. He took 2-57 and scored 36*, but his side succumbed to a 70-run loss at Pembroke. Adair knows it is a big year for the international side, and if he is to play a key part in it then he will want to get as much competitive cricket under his belt as he can early on. The Knights side is flush with good all-rounders, but it is Adair that has the proven talent on the world stage that he will want to bring with more consistency to inter-provincial cricket - and in doing so, lead the Knights to success.

Leinster Lightning - Andrew Balbirnie
The return to Irish domestic cricket for the Irish captain. This match will be as much a statement as a performance, as Balbirnie looks to get his home season off to a positive start. His recent time with Glamorgan had highs and lows, but gave the Dubliner excellent preparation time for the summer ahead. Balbirnie will have watched his Lightning teammates win their first two matches in style, and it will have driven his desire to get back on the field and play his part. He missed both 50-over matches in 2020 against the Knights - playing for Glamorgan in the Vitality Blast - and will be keen to get one-up on his mate Paul Stirling.

Bowling, bowling, bowling. Both sides are full of batting talent, and have the ability to bat to conditions and mount a good score (or chase down that score). What will be crucial is how both sides bowling units perform on the day. We have the pace and bounce of Chase, McCarthy and Little against the guile and accuracy of McCarter, Adair and Pretorius. Which side’s seam attack can be more effective on the day will likely see their side home. However, depending on conditions, the spinners may also play a vital role - and in that challenge you potentially have the experience of Simi Singh and George Dockrell against the wily Cameron-Dow and confident leggies of Ben White, who took three wickets yesterday for the Wolves. Whatever way you cut it, this will be a fascinating encounter.