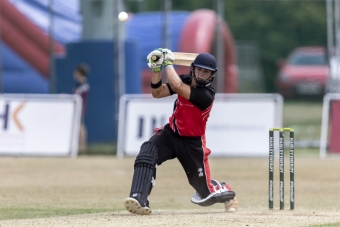 Can Munster win their first T20 against the Knights tomorrow?

The Northern Knights will be looking to continue their winning run while Munster Reds are searching for a first Test Triangle Inter-Provincial Series victory when the two teams meet at Stormont on Thursday (1.30pm).

There will be coverage of the game through a live scorecard and video highlights in the match centre.

Munster is a dangerous side that is packed full of young talent and have proved what they are capable of by recording victories over both Leinster Lightning and the North West Warriors in the 2018 competition.
They haven’t been able to enjoy the same success against the Northern Knights, with the defending champions winning all five of their meetings since 2017.

Having picked up a win against the Warriors at Bready last Thursday, Knights head coach Simon Johnston will be looking for his side to gather momentum with another victory after Tuesday’s encounter with the Lightning was cancelled due to bad weather.

It will be another special day for the Tector family with Knights and Ireland all-rounder Harry coming up against his brothers Jack and Tim who are in the Reds squad.

Storm Francis brought a lot of rainfall to the area earlier this week and after a dry morning, there is yet more afternoon rain forecast in Belfast.

The Knights go into the game with an unchanged squad from the one that was named for the ill-fated Lightning clash. From their opening victory over the Warriors, Marc Ellison has replaced Paul Stirling and the CSNI batsman in fine form, scoring 165 runs at a strike rate of 137 in the NCU.

He is just one option that the Knights could go with to partner James McCollum at the top of the order as Ross Adair, Ruhan Pretorius and Shane Getkate are all more than capable of fulfilling the role.

Reds head coach Ted Williamson has a squad of young talent at his disposal and they have what it takes to cause problems to any team in this competition. JJ Garth was named in Ireland’s 21-man squad for their recent ODI series against England and his leg-spin will be crucial to Munster in this campaign.

19-year-old wicketkeeper-batsman Neil Rock, who scored 58* for the Ireland Wolves in February against Namibia, is another exciting player and he will be coming up against a Knights side that he’s joining for the 50-over matches in September. Image: Shane Getkate on his way to 49 against Munster Reds in 2019

Northern Knights – James McCollum
McCollum hasn’t been able to spend too much time in the middle this summer as he was left out of the three Ireland matchday squads in Southampton, but the innings that he has played leave you thinking he could be set for a big Inter-Provincial Series. On his return to the club scene with Waringstown, he has scored 109 runs in three innings at an average of 54.5, including a half-century against CIYMS. The 25-year-old has talent in abundance and is willing to work hard to succeed, so expect him to pop up with some notable contributions in the near future.

Munster Reds – Matthew Foster
Foster’s game has come on leaps and bounds over the last couple of seasons and he made his First-Class debut in March 2019 against Sussex at Hove for Cardiff University. The 20-year-old has since went on to make two further appearances at that level for the Northern Knights and was also involved in the Ireland Academy side that travelled to England for two matches last summer. Foster, who bowls with good pace and gets the ball to move, will be coming up against four of his CSNI team-mates on Thursday and he possesses the ability to have a big say on proceedings.

Munster captain Jack Tector has a big role to play at the top of the order as it will be important to set a platform and he has had previous success against the Knights, scoring 59 from 40 deliveries back in 2017.
The Knights have batted first in all five of their victories over the Reds since 2017 with their lowest score in a completed 20-over match sitting at 165, so they have been able to apply serious scoreboard pressure on each occasion.

Forecasted rain and conditions could affect their decision at the venue, but the Knights will probably look to carry out the exact same game plan this time round with the number of hard-hitting batsmen and the depth in their squad.

Early wickets and sustained periods of pressure in the middle overs will be key for the Reds if they want to come out on the winning side.