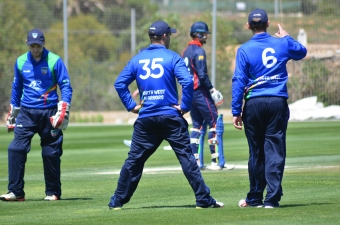 The Northern Knights will be hoping they can finally get back in action while the North West Warriors are searching for their first Test Triangle Inter-Provincial Series victory of the season when the two teams meet on Tuesday at The Green, Comber.

Since the Knights recorded a two-run victory over the Warriors at Bready on the opening day of the 2020 Inter-Provincial campaign (August 20), they have had to sit and watch the rain fall as their fixtures with Leinster Lightning and Munster Reds were both cancelled.

With the weather forecast currently showing no signs of rain for Tuesday afternoon, the defending champions will be hopeful that they can get back onto the field of play and pick up from where they left off.

The Warriors were in action in Dublin on Thursday in a rain-affected clash with Leinster, who ran out victors by 24 runs thanks to 82* from Kevin O’Brien and three Simi Singh wickets.

They will be eager to get a victory under their belt as they look to gain momentum heading into the second half of the T20 calendar before the 50-over series gets underway on September 10.

This game was scheduled to be played at The Lawn in Waringstown but due to last week’s bad weather, the ground is unplayable and it has been moved to the home of North Down CC.

The venue is set for a busy week having hosted the NCU Twenty20 Cup final on Sunday, the Inter-Provincial encounter on Tuesday before the semi-finals and final of the NCU league season this weekend.

The Knights are again unchanged from the two squads that they named for their void fixtures over the past week.

Their hero of the opening victory over the Warriors, Paul Stirling, is currently in England playing for Northants in the Vitality T20 Blast and got his campaign off to a flying start by scoring 80* and taking 2-26 against Worcestershire.

Ross Adair, who made his Inter-Provincial debut in that Warriors win, will likely be the man to fill the void left at the top of the order and should open alongside James McCollum.

The Warriors have received a massive boost as Boyd Rankin is named in their squad for the first time this season after recovering from a back injury that kept him out of Ireland’s three-game ODI series against England.

His inclusion adds another dimension to their fast bowling unit that includes the likes of Graham Hume, who picked up another three wickets against Leinster on Thursday and fellow international team-mate Craig Young. Image: Mark Adair will once more be a key player for the Knights

Northern Knights – Mark Adair
Adair is a class act with the ball in Twenty20 cricket, bowling with control and decent pace at the start but also has the ability to come back at the death with his variation and skill. The Ireland international was in fine form once again for club side CIYMS on Sunday, picking up another Man of the Match award for his spell of 1-9 from four overs as he helped the Belfast outfit qualify for the All-Ireland Twenty20 Cup. He is also very dangerous with the bat and can be used as a floater, coming in anywhere from number three to score quick runs.

North West Warriors – Stuart Thompson
29-year-old Thompson has a wealth of experience in the shortest format having played in 41 T20I’s for Ireland since making his debut against the West Indies back in February 2014. He has scored his 328 international T20 runs at a strike rate of 129.13 and will have a crucial role to play in the Warriors top-order. Thompson will also have a big say with the ball in hand as he looks to back up the likes of Young, Rankin and captain Andy McBrine.

The last time an Inter-Provincial Twenty20 game was played at The Green was back in the summer of 2016 when the Knights lost out to Leinster by 24 runs and they also came out on the losing side against the Warriors by a margin of 12 runs two months prior.

Given how long has passed and the turnover in players in the past four years on both sides (only six from that 22 will be involved on Tuesday), you can’t read too much into it but what we do know is that The Green is credited for having one of the best wickets in the country.

Although down a step on the ladder, the nine T20 matches that have been played at the venue across the last two seasons in club cricket has produced an almost even split of winners in teams that bat first (four times) and the side that chases (five times).

The average first innings score in those games has been around 136 so considering the quality on show, whichever side bats first will have to do it well and post a big total in order to give themselves a chance in the second innings.

Early wickets will be key for both sides and there are plenty of bowlers on each team capable of having a big impact on proceedings.