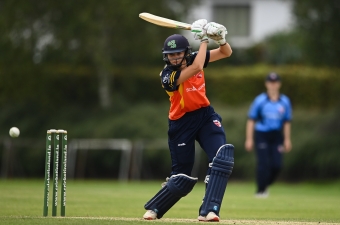 Gaby Lewis is the leading run-scorer in the Series

The Scorchers and Typhoons will bring their Super 50 Series to a climax when the two sides meet in a winner-takes-all encounter on Sunday at Malahide starting 10.30am (the livestream and commentary will begin at 10.15am).

After seven tense and seesawing matches within which the two sides have traded blows and seen momentum swings, the Scorchers lead 4-3 – however, with the Typhoons holding the better Net Run Rate, the series will effectively come down to which team prevails on the final day.

The Scorchers opening pair of Gaby Lewis (248 runs at 41.33) and Leah Paul (214 runs at 35.67) lead the overall Series batting charts and have given a great platform to their side in most games. Lewis in particular showed sparkling early form hitting two half-centuries at a strike rate of 73.37.

On the flip side, the Typhoons bowlers hold three of the top four wicket-taking positions in the Series, with Celeste Raack (11 wickets at 16.27), Orla Prendergast (9 wickets at 18.44) and Georgina Dempsey (8 wickets at 18.75) – only separated by the Scorchers Sophie MacMahon in second place (10 wickets at 19.5).

After losing the first match of the Series, the Scorchers took the next three matches comprehensively, and looked set for a convincing trophy win – however, the Typhoons fought back after the halfway break in the Series to win two of the next three, including last weekend’s demolition of the talented Scorchers batting line up in an 8-wicket win.

Despite the men’s inter-provincial series being blighted by poor weather, the Super Series has gone ahead uninterrupted, and pleasingly the weather forecasts look good for the decider.

Head Coach Glenn Querl did not look a happy observer as his side capitulated for just 63 in the last match at Merrion CC (at one stage they were 10-5 in the 5th over). While every team has ‘one of those days’ with the bat, he will be looking for a vastly better performance from his players, particularly looking at Lewis, Paul and the experienced Shauna Kavanagh to step forward, and his team to recapture their early series form.

Louise McCarthy will miss the game due to work commitments, so the Scorchers will be looking to MacMahon and Hannah Little to provide the pace up front to make early breakthroughs.

Former international and Head Coach of the Typhoons Clare Shillington was extremely pleased with her sides performances since the halfway mark of the Series and will be wanting a big finish and claim a come-from-behind trophy.

Led by international skipper Laura Delany, the Typhoons have their tails up after winning two of the last three matches and see the return of Robyn Lewis to the squad. A big loss for this last game is Amy Hunter, the keeper-batter has performed well behind the stumps this season and contributed 104 runs at 26, with one half-century. Sarah Forbes will deputise with the gloves. Scorchers – Sophie MacMahon
MacMahon is not only the competition’s second highest wicket-taker, but scored 128 runs at 21.33, including a 66* back in Game 2. Her 5-41 in Game 6 demonstrated her bowling strengths - bowling three batters, trapping one LBW and the last wicket was caught behind. Such dismissals show that when she attacks the stumps she is a handful for the Typhoons batting line-up. With no Louise McCarthy in the side, MacMahon will likely be the Scorchers biggest wicket-taking weapon, and the valuable runs she provides with the bat makes her an all-round asset for her team.

Typhoons – Rebecca Stokell
Stokell has had a solid season at the top of the order for the Typhoons, scoring 177 runs at 29.5 (the competition’s third highest run-scorer), but as her coach Clare Shillington said in a recent interview, she will be disappointed that she hasn’t gone on to make a really big score this season. Her scores of 42, 9, 36, 32, 31, 27 have all been important contributions, but Stokell is perhaps due to convert big, if the opportunity presents itself. Only Gaby Lewis has hit more boundaries than her this Series, and her power and timing has at times looked effortless. Expect her to feature once more with the bat, perhaps this time playing an incisive innings.

While it is clear that the Scorchers need to put the last game’s batting effort behind them, the experience though has certainly changed the momentum of the Series and there is certainly an air of optimism in the Typhoons camp.

Louise McCarthy’s absence means that the young Scorchers attack is without their most experienced asset, but there is still a good bowling outfit to trouble the Typhoons batters.

The Typhoons have looked a more formidable unit as the Series has unfurled and have been strengthened further by Robyn Lewis’ inclusion.

The key match ups in this deciding clash may well be the Scorchers top order batters versus the Typhoons bowlers. If the likes of Gaby Lewis, Leah Paul and Shauna Kavanagh get away to a good start, then the Scorchers will be very competitive. However, as Game 5 and 7 show, if the Typhoons breakthrough early then they have shown that they can keep the Scorchers down.