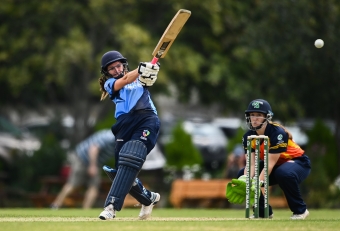 The Typhoons begin their title defence at Pembroke

DUBLIN - The Arachas Women’s Super Series finally gets underway this Sunday with the first match in the Super 50 Cup being played at Pembroke - full livestream and livescoring will be available.

The match is between the Typhoons - the title-holders from 2020 - and the Scorchers (see the full squads here).

The teams have announced their playing XI’s: Image: Sophie MacMahon on her way to 66* at last year’s Pembroke encounter

What does the form book say?


Early season is notoriously hard to predict, given all players have had an extended break from playing competitively since September 2020. That is, except Lara Maritz and Ashlee King, who both have recently travelled to Ireland off the back of a summer of cricket in Australia. Irish fans will be keen to see Maritz return to action in Ireland after 18 months down under, while fans will be keen to learn more about the Australian King, who will make her Super Series debut in this match.

Indeed, Scorchers captain Gaby Lewis expressed her delight at adding both players to her squad, and spoke of the potential “X-factor” that King may be able to inject to the Scorchers (see interview below).

When the two sides met at this venue early in the 2020 season, the Scorchers dominated the match, winning by 8 wickets, led by a run-a-ball 66* by Sophie MacMahon and solid scores of 42 and 40 by openers Leah Paul and Gaby Lewis respectively.

All the odds point to the Scorchers in this match, but it was the Typhoons who came out of the blocks last season and won the opening day encounter. It’s certainly set up for an interesting match.

Scorchers - opening combination
The fortune of the Scorchers may well come down to the left/right hand opening partnership of Leah Paul and Gaby Lewis. The pair finished first and second in the highest run-scorer charts from the 2020 Super Series, and are keen to continue their good run of form.

Typhoons - bowling attack
Captain Delany highlighted her strong seam attack as an area of potency last week, and expect Orla Prendergast to lead the line, while we may well see Celeste Raack coming into her own after a solid 2020 season. Indeed, the Australian-born leg-spinner topped the Typhoons wicket-taking charts claiming 12 wickets at an average of 17 apiece, but will be keen to drive her game on further coming into a double world cup qualifier year.

As there are still no crowds permitted to attend, the match will be livestreamed on Cricket Ireland Live and livescored on our Match Centre.