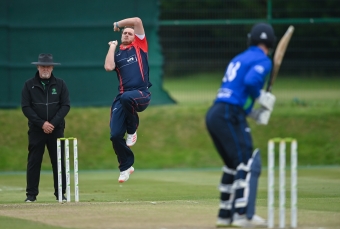 The Knights and Warriors will battle it out at Bready

After a false start on Thursday due to bad weather, the Test Triangle Inter-Provincial Cup is set to get underway on Tuesday morning at Bready when the North West Warriors take on the Northern Knights (10.15am).

This is the first game in the 50-over competition for the 2020 season and follows on from the Inter-Provincial Trophy, which was won by Leinster Lightning for a sixth time.

Lightning are defending champions in this competition and have won it for the past six seasons, but both the Warriors and Knights will be looking to challenge once again.

The Warriors will be aiming to put the Twenty20 tournament, which was heavily impacted by bad weather, behind them after they lost all three of their games that were played, including twice to the Knights.

Knights, led by captain Gary Wilson, edged past the Warriors by two runs in the opening game of the Inter-Provincial season before a more comfortable eight-wicket victory earlier this month as James McCollum scored 79*.

That wasn’t enough to defend their title as they lost out to Lightning at Pembroke two weeks ago, but they’ll now turn their focus to the 50-over tournament, which they last won in 2013.

The sun is set to shine at Bready on Tuesday morning and the good weather is forecasted to continue for the rest of the day, so it looks like the Inter-Provincial Cup will get underway with a bang.

The Warriors have maintained the same squad of players that competed in the Inter-Provincial Trophy and head coach Ian McGregor can call on the experience of six Ireland internationals, including Boyd Rankin and William Porterfield.

Ryan Hunter scored 37 in his first appearance of the season against the Knights last week and could again play an important role in the top-order with his game well-suited to the longer format.

The Knights make a few changes to their squad with Marc Ellison, Neil Rock and Matthew Foster all coming in for the 50-over series.

Ellison finished the 2019 season as second-highest run-scorer (208) behind Ireland captain Andy Balbirnie and he will likely once again open the batting alongside James McCollum. North West Warriors – William Porterfield
Porterfield looked in fine touch in each of the three Twenty20 innings he played, scoring 118 runs at an impressive strike rate of 140.57. Only Ireland international team-mate Kevin O’Brien contributed more runs (148) than Porterfield and the increase in overs will likely bring even more out of the 36-year-old. With 139 ODI’s under his belt in which he has scored 4091 runs at an average of 30.75, his experience and quality will be crucial as the Warriors look to start their campaign on a winning note.

Northern Knights – Ruhan Pretorius
Pretorius was in frightening form in his last outings for club side North Down as he smashed 120* from 56 balls (seven fours, nine sixes) in a league semi-final victory over Instonians and followed it up with 47 the next day as the Comber side defeated Waringstown to be crowned champions. The 29-year-old made his Knights 50-over debut against the Warriors last summer, marking the occasion by scoring 96 at the top of the order. It is yet to be seen where he will bat this season but Pretorius also has an important role to play with ball in hand as he looks to back up the likes of Mark Adair and Graeme McCarter.

Just like their recent record in Twenty20 cricket, the fixture is extremely competitive in this format with the Knights winning three of their last five meetings.

They played three times in 2019 with the Knights winning by 117 runs in La Manga but it was much more competitive in the other two games with margins of two runs and three runs separating the teams.

Knights captain Wilson has been important in the middle order, scoring 106 runs in his three most recent outings and if early wickets were to fall again, he has the experience and ability required to rebuild.

Harry Tector has also enjoyed playing against the Warriors, collecting eight wickets across the two latest games and while his main role will be scoring runs in the top order, his dangerous off-spin could again be crucial.

Graham Kennedy and Stuart Thompson were the standout performers for the Warriors against the Knights in 2019 with the former picking up five wickets, including 3-48 at Eglinton while Thompson scored 59 in the same game and collected four wickets in the prior match.