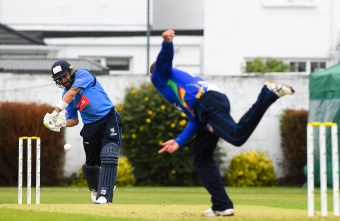 Can the Warriors stop the Lightning's charge to the title?

Leinster Lightning could win their seventh consecutive Test Triangle Inter-Provincial Cup on Tuesday if they record a bonus point victory over North West Warriors at Bready (10:15am).

Despite only playing one game in the 50-over competition, which they won by 91 runs against Northern Knights last week at Comber, other matches being called off due to bad weather has opened up an early opportunity for Lightning to defend their title once again.

Head coach Nigel Jones will be looking for a similarly dominant and ruthless performance when they travel to the Warriors before the reverse fixture takes place at Malahide next Monday in what will be the final Inter-Provincial game of the season.

The Warriors have had their whole season heavily impacted by the weather as they were only able to play three of six Inter-Provincial Trophy games and their opening two Cup matches against the Knights were both called off without a ball being bowled.

They will be keen to finally get back onto the field and show what they are capable of in their final two encounters and pick up a first win of the campaign.

Leinster have won all five of their most recent meetings, including one by 78 runs at the same venue in 2019, but the Warriors have a side packed full of quality that is more than capable of causing an upset.

The current forecast shows early morning cloud before some potentially heavy showers could be set to move into the area in the afternoon.

The Warriors have been able to maintain a consistent panel of players from which to select for their Inter-Provincial campaign and head coach Ian McGregor will be hoping for some play so that his men can showcase their skills.

Andy McBrine, who played in the Clear Currency All-Ireland Twenty20 Cup final for Donemana on Saturday, will once again lead the Warriors while he has experienced internationals to call upon in William Porterfield, Boyd Rankin, Stuart Thompson and Craig Young.

Lightning welcomed Josh Little back into their side for the opening 50-over match against the Knights and he showed his class by collecting the first two wickets before ending with figures of 3-32.

There is set to be at least four of the YMCA side that won the All-Ireland Twenty20 Cup at the weekend present in their squad as they go in pursuit of yet more silverware. Image: Stuart Thompson hits out against the Lightning in the T20 Trophy

North West Warriors – Stuart Thompson
Although it has been a barren run against Lightning for the Warriors in terms of results, Thompson has often been the one that puts in big performances. Flashing back to May 2016, he picked up four wickets before collecting another three in the following game, combining with a half-century when captaining the side. Thompson plays a crucial role with both bat and ball due to his versatility and quality, and if the Warriors are to get points from this game, Thompson will once again be important.

Leinster Lightning – Jack Tector
Tector’s Inter-Provincial Cup campaign may not have got off to the ideal start as he was caught behind off the first ball of the innings on Thursday but the opening batsman is a class act and will be able to bounce back. He captained YMCA to All-Ireland Twenty20 Cup glory in Belfast on Saturday, picking up the man of the match award after scoring 62 from 48 deliveries as the Dubliners won by 29 runs. The 24-year-old enjoys playing against the Warriors at Bready, scoring 110 last season while putting on a partnership of 182 with Andy Balbirnie and also registered a half-century at the same venue in July 2017.

Lightning have batted first in each of their last five victories over the Warriors and although they’ve often made a good start with the ball, the North West side haven’t been able to maintain it throughout the whole innings and have allowed a partnership to take the game away from them.

Last season it was the aforementioned stand between Tector and Balbirnie while in 2018 Lightning recovered from 148-7 to 251-8 thanks to late order hitting from Lorcan Tucker (46*) and Tyrone Kane (57).

The Warriors will be confident of getting early wickets with their impressive pace bowlers at the top but they’ll need a sustained period of quality if they are to come out on the winning side with so many Lightning players able to make a difference.

For Leinster, they will be looking to do much of the same that has got them to this point by applying scoreboard pressure to allow their bowling attack to get to work.

Spin has often been key for them against the Warriors with captain George Dockrell (12) and Simi Singh (8) sharing 20 wickets in their last five meetings.