May 23rd 2019 by Andrew Blair White | International, Other 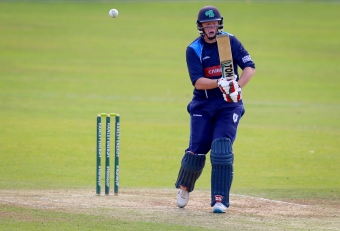 Leinster Lightning continue their unbeaten start to the season

BREADY - A century from Jack Tector and 94 from Andrew Balbirnie propelled Leinster Lightning to a convincing 78-run win over the North West Warriors in Bready. The pair shared a mammoth 182-run second wicket stand to take the Lightning to 271-5 from their fifty overs, a score which proved to be far too much for the Warriors.

Having won the toss, Lightning captain George Dockrell elected to bat and despite the early loss of Stephen Doheny for 7, Tector and Balbirnie quickly were into their stride. Tector was initially watchful, but as his innings grew, his range of shots became more and more expansive. His 110 included 13 fours and a big six over long on in his 140-ball stay at the crease. Balbirnie was similar, carrying his international form back into the domestic arena, but was watchful to begin with due to some tight bowling from late North West call-up Graham Hume and captain, Andy McBrine.

Balbirnie was really beginning to kick on when he went after one too many, and found long off’s hands on 94. Lorcan Tucker came and went while playing a breezy and entertaining cameo of 14 before Tector himself fell with three overs left to go. Small late runs from George Dockrell, Simi Singh and Kevin O’Brien got Leinster up to 271, which was probably above par on the Bready pitch.

Lightning’s opening bowling was tight early on, and was rewarded when Tyrone Kane accounted for Marcus Poskitt’s stumps on 10. David Barr and David Rankin then came together and batted carefully. They brought the score to 64, before a sharp piece of fielding led to Barr being run out for 31. This led to a flurry of wickets in the middle order - 70-2 quickly becming 82-5, with Dockrell and Gareth Delany accounting for the majority of the Warriors middle-order.

Rankin survived the wobble and registered a half-century before falling for 56, and paired with Graham Kennedy departing shortly after for 9, left the Warriors 127-7. Late runs from Graham Hume (39*) and Andrew Austin ensured the North West side didn’t go down easily, bringing their total up to 193. However, it was Dockrell who dismissed David Scanlon to seal the Warriors fate, finishing with figures of 4-41, while Delany also picked up 3-47.

The Lightning’s win continues their unbeaten start to the competition. The next Inter-Provincial Cup match is between Northern Knights and North West Warriors on 27 May 2019 at Stormont.