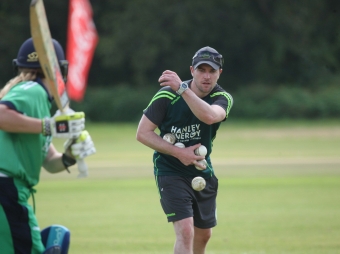 DUBLIN - Cricket Ireland has today announced that Fintan McAllister will take up temporary duties as Women’s Performance Coach in the national set-up and Women’s Academy until the end of the ICC Women’s T20 World Cup Qualifier, as squads were announced for Academy and under-age fixtures in July and August.

McAllister will work alongside Interim Head Coach Ed Joyce in the senior international side, while also coaching the Academy side in three upcoming fixtures.

“It’s great to have the opportunity to work with Ed in the build-up to the Qualifier, and also lead the Women’s Academy side for these games against Scotland Academy. The Academy is a brilliant stepping stone for players between club cricket and international cricket, providing an opportunity for those wanting to develop their game and push for higher honours. I know the players have been working extremely hard over the last number of months and good progress is being made, and I’m looking forward to supporting the work in improving and developing the next generation of senior internationals.”

“Fintan has been a great asset to the women’s senior squad in a Specialist Fielding and Wicket-Keeping Coach capacity at various times over the last couple of years.  His coaching has progressed immensely and I would like to acknowledge and thank the support of Cricket Leinster in supporting the secondment of Fintan during this period.”


The Ireland Under-19s women’s squad will travel to Northamptonshire in the middle of August to play against their county side, which will provide invaluable experience for the players involved.


The Ireland Under-15s girls squad will travel to the Netherlands at the end of July to play five T20 games against their Dutch counterparts.

“This group of players have worked really hard during the winter program on all aspects of their games. Clare [Shillington] and I are really looking forward to seeing them show off their skills and test themselves in different match situations and different conditions. It’s brilliant that an under-15s squad can go to the Netherlands and play against another international side this early in their development. It should be a trip full of massive learning opportunities.”