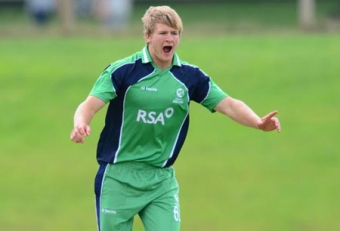 Barry McCarthy has been rewarded for an outstanding start to the season with an Ireland call-up for the KPC Group One-Day International Series against Sri Lanka in two weeks time.

The 23-year-old Pembroke seamer, who took his maiden first-class five wicket haul for Durham last month, is the one uncapped player in the 13-man squad for the games at Malahide on June 16 and 18.

“It has been a great last couple of weeks and this news has really put the icing on the cake for me,” said McCarthy. “It’s been brilliant to play first-team cricket at Durham and to achieve success too, which has given me great confidence should I get a chance against Sri Lanka.”

McCarthy spent the winter in Sydney playing grade cricket with Randwick-Petersham as part of an ongoing programme with Cricket Ireland, and the Pembroke man believes this benefitted his game tremendously.

“My exchange programme with Randwick Petersham last winter has certainly helped me with my cricket. It’s played an integral role in getting me this recognition, and I am very grateful to Cricket Ireland for that opportunity.

Ireland Head Coach John Bracewell welcomed McCarthy into the squad saying: “Barry has been in tremendous form with Durham and deserves his opportunity. He’s a powerful cricketer who will fit in well with the squad.

“There are a few players who are unlucky to miss out, most notably Graeme McCarter who has been the form bowler in the Inter-Provincial series to date, and John Anderson.”

Bracewell explained the rationale in keeping faith with the majority of the current squad - seven of whom have made more than 100 international appearances.

“Whilst we as selectors are not afraid to take a punt, continuity is also important. The side selected are proven performers at this level and with a busy summer of cricket we believe starting the season with a strong core of hardened internationals is the place to start.

“John Anderson and Graeme McCarter are putting the players on notice and that is what we want.”

Chairman of Selectors Alan Lewis echoed the sentiments of Bracewell adding: “After the disappointment of the World T20 it will be great to get back on the horse as it were. It’s fantastic that we have so many fixtures this summer, which will put real heat on all to perform.

“The inclusion of Barry McCarthy is richly deserved and I am sure the captain will be looking for players in this all-rounder space to seriously put their hand up for the future.

“With John Anderson and Graeme McCarter’s Inter-Provincial form they can count themselves unlucky not to be in the 13. We hope they continue their rich vein of form and ensure that all current holders of the green jersey are kept on their toes in what is a really busy summer.”

Craig Young (elbow) and Andrew Balbirnie (hip) are not available due to injury.

Tickets for the KPC Group ODI Series are available via the Cricket Ireland website www.cricketireland.ie and TicketMaster outlets nationwide www.ticketmaster.ie Translink have also confirmed that the Enterprise will stop at Malahide on both match days – ticket and further details can be found on www.Translink.co.uk.