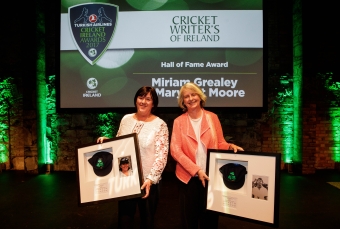 DUBLIN – International captain, Team Manager, Chair of National Selectors and coach – these are just a few of the roles Irish cricket legend Miriam Grealey has held over the last 40 years. Today she announced that “all good things must come to an end” and she will step down this month as Ireland Women’s selector, effectively ending a 40-year involvement in international cricket.

Born in Donegal, but raised in Dublin, Grealey played cricket for 28 years. She made her international debut in 1985 – playing 79 One-Day internationals and one Test match - and rising to the national captaincy and breaking many records along the way.

After retiring from the international team in 2005, she continued her involvement with Irish women’s cricket as Team Manager, coach and Chair of National Selectors. Acknowledged as an inspiration and role model for Irish cricketers for generations, in 2017, Grealey has been recognised variously, including her induction into the Cricket Writers of Ireland Hall of Fame in 2017, and international recognition from the Marylebone Cricket Club (MCC) with Honorary Life Membership for her services to cricket.

Although her involvement in Irish cricket has been extensive, Grealey admits there was no ‘grand plan’ behind the last four decades.

“How did I stay in cricket so long? Quite simply my love of the game, and every aspect of it - with the exception of manager!”

“As captain I was always involved in selection, and from there it seemed a natural progression to start some coaching - mainly with the underage squads, and finally onto the national squad. A couple of years after retiring from club cricket, I was asked to become a selector for the senior squad. I was still watching heaps of cricket, had the knowledge, so thought why not.” Image: Irish captain Miriam Grealey introduces then President of Ireland Mary Robinson to the Ireland team at Clontarf ahead of the England game, 1995

Even her introduction to cricket was fortuitous and not out of any family or community tradition:

“I went to school at St. Andrews College where there was boys cricket, but only hockey for the girls. When I was in fifth year in 1982, one of the teachers Caroline Watson - who at the time played cricket for YMCA and Ireland - asked around to see if any girls were interested in learning the sport. So, from chucking a tennis ball around in PE classes to actually playing in the school league the following year, I was hooked.”

It’s always hard to single out favourite moments or matches from a sportsperson with such an extensive career, but Grealey recounted several of her abiding memories from her playing days.

“Individually, I guess scoring my first 100 for my country against Pakistan stands out. I also remember hitting 50 against Australia in College Park, solely because I had to face Cathryn Fitzpatrick and my teammates all knew I preferred slow bowling to quickies. I was fairly black-and-blue by the time she had finished her spell, so it was without exception my best battling 50!”

“I guess though my proudest moment was winning the European Cup with Ireland in 2001, our first major trophy beating England in the final.” However, after a long commitment to the game, Grealey has finally conceded that the commitment as national selector is becoming too challenging given the requirements of the role, and balancing that with her job and family life.

“Being a national selector is a big commitment. I don’t attend many winter net sessions, as I know this is the time the girls are working on correcting parts of their games, and don’t need me standing there looking over them. Once the season gets underway, we try to cover as many games as possible. Basically, I then inform the other selectors and coach about certain players we were keeping an eye on. Statistics can lie, so it’s important to watch the game. Scoring big doesn’t mean you weren’t dropped a few times or played poor shots. Equally, good bowling figures means very little, unless you see ‘how’ they bowled. I guess I can’t commit that time anymore and is one of the reasons I’m stepping down as selector - the girls work too hard not to have a selector who’s totally committed.”

But will we still see Miriam around the grounds?

“Yes, of course - it would be impossible to keep me away!”

“It’s been fantastic to work with Miriam - a true legend of the Irish game. Her passion for cricket, her experience and her insights have helped in the development of generations of Irish cricketers. Throughout the many roles she has undertaken, Miriam has been a role model for many, and an ambassador for all. While we will miss her contributions at an official level, she will undoubtedly continue to be a regular supporter of our national sides, and an advocate for the women’s game in this country.”

Cricket Ireland has opened the recruitment process for the role of National Women’s Selector (see here). Applications close on 21 February 2020. Image: Miriam Grealey (second from left, front row) and the winning the European Cup team in 2001