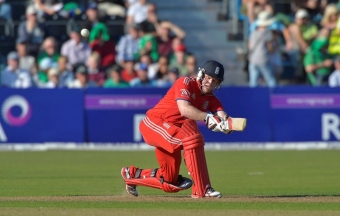 England were given a probing work-out ahead of the upcoming five-game series with Australia but had captain Eoin Morgan and Ravi Bopara, who both struck unbeaten centuries, to thank as they survived a big scare to overcome a resilient Ireland side by six wickets in the RSA Challenge at Malahide.

The pair put on an unbeaten fifth wicket stand of 226 to deny the hosts another memorable scalp and send the majority of the 10,000 capacity crowd home thinking of what might have been.

On his return to the ground where he played the majority of his club cricket, Morgan took the game away from the country of his birth with a stunning innings which included some glorious strokeplay and powerful blows after the visitors lost four early wickets in pursuit of 270 for victory.

However, the unorthodox left-hander smashed eight fours and four maximums on his way to an unbeaten 124 and formed a formidable partnership with Bopara (101*) as they bludgeoned their side to victory with seven overs to spare.

It was a harsh reminder for the locals of the lure that their near neighbours have on the country’s best players as Morgan and another former Irish international, Boyd Rankin were the stand-out performers in a largely below-par performance by Ashley Giles’ charges.

The visitors included three debutants, slumped to 48/4 after William Porterfield’s sixth ODI century had propelled Ireland to 269/7 from their allocated overs.

However, the Warwickshire left-handers’ first three figure score on the international stage for three years was overshadowed by his close friend who played an equally impressive captain’s innings to serve a timely reminder of his capabilities with the bat after an indifferent year. With the limited-overs series against Australia beginning on Friday, the victory will be a morale-boosting one for those in red apparel. But, there will be reservations about a couple of those sporting the Three Lions emblem who simply froze on the big occasion at the new home of Irish cricket.

It was a debut to forget for Hampshire’s Michael Carberry and in-form batsman Gary Ballance who both succumbed during an early Irish onslaught led by Tim Murtagh who claimed 3/33 as the home side sniffed a second defeat against their near neighbours was in the offing.

Carberry started briskly with a couple of trademark boundaries but his stay in the middle was brief as he was adjudged lbw to Trent Johnston for 10. It compounded a miserable day for the opener who dropped two catches in the field as well as seeing his solitary over going for twelve.

However, he wasn’t alone as Ballance, Luke Wright and James Taylor all departed cheaply on a surface which yielded well over five hundred runs.

Johnston, playing his last game in the Irish capital before he retires later this year, halted Carberry’s early momentum with an in-swinging delivery before Murtagh produced an inspired spell to give the hosts real hope. The ever-reliable Middlesex seamer dismissed Ballance second ball in the same over Wright had chopped onto his stumps after struggling for five. Taylor was joined by his captain at the crease to take the score towards the fifty mark during a slow and watchful first powerplay but his furniture was soon re-arranged by Murtagh for 25.

It’s a feeling of deja vu for Ireland as they once again spurned an opportunity to claim their first victory over one of the major Test playing nations on home soil but the progress made off the field was clearly evident with the largest ever crowd at a cricket game on the Emerald Isle on hand to witness an innings of high-quality from one of their own.

Earlier, Irish skipper Porterfield defied his horrid run of form with the bat for Warwickshire as he equalled his highest ODI score before becoming one of four victims for former compatriot Rankin on the day he became the eight player to represent two countries in One-Day Internationals.

The industrious left-hander struck 14 fours and a six on his way to becoming Ireland’s leading run-scorer in the limited-overs format and providing the foundation for a total which ended up being a few too light on what turned out the be an excellent batting track.

Morgan’s decision to bowl first on a moist pitch paid immediate dividends as Rankin recovered from a nervy start to claim the wickets of Paul Stirling (10) and Ed Joyce (1) during a varied first-spell.

Porterfield and then Stirling cracked a couple of boundaries off the Warwickshire seamer but the 29-year-old soon halted the hosts’ early momentum with the double-strike. Firstly, Ballance took a fine low catch at second-slip to end Stirling’s brief spell before Joyce was trudging back to the pavillion in slightly unfortunate circumstances.

The left-hander went back to nudge Rankin into the off-side but clipped the base of the stump with his heel, gently dislodging the bail, leaving the hosts 36/2 after a bright start.

However, the wickets at the other end did little to deter Porterfield as he and Niall O’Brien established a solid platform with a 59-run fourth wicket partnership which should have been ended when James Tredwell drew an uncharacteristic shot out of O’Brien, only for Carberry to shell the chance at deep mid-wicket.

The Kent off-spinner proved to be a thorn in the Irish side as he bowled ten economical overs as well as taking the wickets of O’Brien (26) and then Gary Wilson (2), who seemed to be harshly given out leg before.

Kevin O’Brien, hero of Ireland’s sensational run chase in their famous victory in Bangalore, was unable to build on a watchful start as he mistimed Ravi Bopara straight to Morgan at mid-wicket, who took a good catch on his home ground at Malahide.

England’s sloppiness in the field continued as Ballance failed to react to Porterfield’s thick edge off Tredwell before the Irish skipper was given a life by the hapless Carberry in the deep on 85. It was an opportunity he wasn’t going to waste as he smashed the debutant for a couple of boundaries in his sole over.

The Warwickshire batsman then reached the three figure mark by swatting the returning Rankin into the stand, much to the delight of the home fans.

However, Rankin hit back to end his county colleague’s fine innings in the 46th over and then trapped all-rounder John Mooney lbw for 27 in the same over but Max Sorensen needed little time to propel the hosts past the 250 mark with a couple of hefty blows.

But, it didn’t prove to be enough as the visitors romped home to victory and spoiled a memorable occasion for Irish cricket.