Murtagh leads Ireland to ODI victory despite a late scare 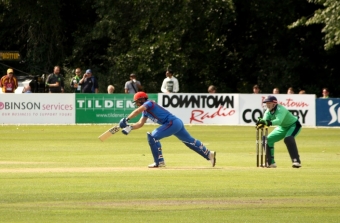 Tim Murtagh, Ireland’s 37-year old paceman, has starred with the ball and hit the winning runs with that bat as the Ireland Men’s cricket team levelled the series with a nervy three-wicket win over Afghanistan in today’s second one-day international (ODI) at Stormont.

Overnight rain did not delay the start of play, and Ireland maintained confidence in its team naming an unchanged line-up from Monday’s first ODI. Ireland’s captain William Porterfield lost the toss, however the decision by Afghanistan to bat first backfired as Ireland made an excellent use of cool conditions and a pitch that had a distinctly green tinge.

Fresh from his career-best bowling figures in the last match, Ireland’s Tim Murtagh was again the destroyer taking four wickets again (the first occasion an Irish bowler has taken consecutive four-wicket hauls in ODIs), and his 4-30 from 10 overs gave him a new career-best bowling return in ODIs. Murtagh’s length and accuracy caused problems from the outset, removing the top three batsmen with just 13 runs on the board.

The bowling tactic for Ireland today was obviously good line-and-length seam bowling, and the Irish bowling unit duly delivered. Boyd Rankin, unlucky to go wicketless after seeing two catches put down off his bowling, bowled again with pace and bounce finishing with 0-22 off 10 overs. Peter Chase and Kevin O’Brien both claimed 1-45 from their respective 10-over spells, with Simi Singh chipping in with 1-17.

Despite their dominance, and having Afghanistan at 100-7 in the 35th over, the Afghan tail wagged and the last three partnerships put on an additional 82 runs, finishing the Afghan innings at 182-9 from 50 overs.

For Afghanistan, an impressive late-order 42 from 52 balls by Najibullah Zadran and a patient 39 by captain Asghar Afghan were the most notable performances with the bat.

The Irish run chase did not get off to the start they wanted losing captain Porterfield for a duck from the fourth ball, bowled by a delivery that kept low and went under his bat. However, a 69-run partnership from Paul Stirling (39 from 50 balls; 3 x fours, 1 x six) and Andrew Balbirnie (60 from 92 balls; 5 x fours) settled any early nerves and put Ireland on the path to victory. Balbirnie was particularly impressive, playing with a straight bat and getting onto the front foot as much as possible. His second half-century on the trot a credit in conditions that most batsmen found difficult.

Seemingly cruising to victory at 87-2 in the 23rd over, key middle-order wickets then fell with Rashid Khan (3-37) leading the Afghans back into the contest. However, standing between the Afghans and an unlikely victory was Simi Singh who batted defiantly with the lower order and saw Ireland through to victory with 36* (off 59 balls; 1 x four, 1 x six).

When Tim Murtagh played the final delivery through the slip region for two to bring up the Irish win, the crowd breathed a collective sigh of relief knowing that the end result was closer than it appeared it would be just ten overs prior and a welcome win for the home side who conceivably lost a winnable match last time out.

“The way the boys stuck at it for 50 overs was great – we asked for a bit more today and we got that. It was always going to be a scrappy game, but it was really nice for Simi to see it through at the end.”

“We were pretty good in the field today, and if we had the same application as today with the bat in the first game then we would likely be standing here two-nil up. I’m really happy with how we went about it today, especially with the ball, and if we can bring that into Friday and get a few more partnerships then it will make things a little bit easier.”

“Tim [Murtagh] is a fantastic performer - he’s been doing it for the last 20 years now. He knows his job and knows what he is doing. It’s great to see him get his rewards for everything he’s done. He’s just such a consistent performer for us.”

“And Balbo [Andrew Balbirnie] getting back to back fifties in scrappy conditions, it’s great to see him do that and fight through, even looking pretty fluent at times.”

“For Simi, the biggest thing for him was seeing that through at the end. It’s good for him and good for his confidence. How he went about it, it’s a different skill in itself to manoeuvre it around and bat with the lower order.”

Ireland and Afghanistan will return to Stormont on Friday for the third and deciding match of the series.