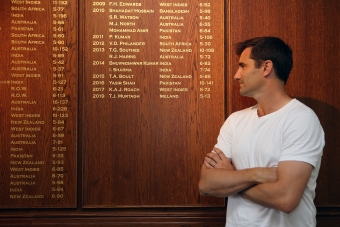 LORD’S - The MCC has formally added Tim Murtagh’s name to the Away Team Honours Board at the Home of Cricket following his fantastic bowling performance during the recent Test Match.

Reflecting on his first-wicket haul after Day One of the Test, Tim said:

“It’s special as it gets for any cricketer. Walking off having taken five wickets is as good a feeling as I’ve had in my career.”

“Growing up as a kid I dreamed of being on that honours board, probably not in that [away] dressing room, but as it’s worked out being in the away dressing room makes it that bit more special now.”

We’re all very proud you’re on there Murts!