Muzamil Sherzad, a pair of unbeaten 70s and an earthquake shake Zimbabwe at the Under-19s World Cup 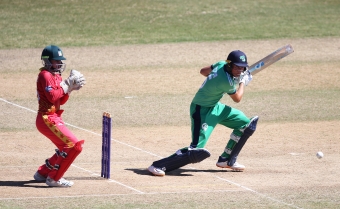 PORT OF SPAIN, Trinidad – A sensational bowling display from Muzamil Sherzad, an unbeaten 159-run third-wicket partnership, and a 5.1 magnitude earthquake featured prominently in Ireland’s 8-wicket win over Zimbabwe in the Plate Semi-Final of the ICC Under-19s Men’s Cricket World Cup at the Queens Park Oval today.

The Irish bowling performance was dominated by the outstanding seam bowling of Muzamil Sherzad. Ireland’s 19-year old Afghanistan-born paceman who plays with North Kildare Cricket Club delivered a fearsome display as he blew away the middle and lower order with a mix of pace, movement and the odd short-pitched ball. Sherzad had claimed six wickets at 23.16 in his last three matches in this tournament, but has seen is bowling average plummet to 14.45 with his five-wicket haul today.

Sherzad, though, wasn’t the only thing that struck at the Queens Park Oval today, with a 5.1 magnitude earthquake shaking the ground mid-way through the Zimbabwe innings. The commentary team, which featured Irishman Andrew Leonard, bravely continued commentating with good humour as an assessment was made of any potential damage to the historic ground that has stood on the site since 1896.

Prior to Sherzad’s interventions into the Zimbabwean batting line-up, bowling honours had certainly gone to Lisburn’s left-arm spinner Matthew Humphreys. The tweaker had eight wickets in the tournament before today, including 4-25 against Uganda, and takes his tally to 11 – equalling Sherzad for Ireland’s highest wicket-takers at this world cup. Humphreys not only used his angle superbly, angling from around the wicket to right-handers and taking the ball away, he also varied his pace to great effect. His second wicket, bowling a quicker ball that skidded through the defences of Steven Saul and upset the stumps, was the stand out dismissal.

The Zimbabwean batters failed to stitch together consistent partnerships, but still eked out a total of 166 that would be defendable on a pitch that was expected to take turn later in the day. The Bennett brothers – Brian and David – top scored with 37 and 35 respectively, but the Irish bowlers never let the African side to get too much momentum at any stage.

In the run-chase, Ireland lost Nathan McGuire (6) and Josh Cox (0) early, but Jack Dickson and captain Tim Tector came together to – firstly – stabilise the innings, then push on to build a superb, unbeaten 159-run third-wicket stand.

Tector was outstanding. Having only scored 40 runs in his previous four innings in the tournament, he looked confident from the outset, determined to lead his side to what was eventually a comfortable victory. He struck 8 fours and a six in a knock of 76* that swung the match firmly into Ireland’s grasp. When he came to the crease his side was 10-2 facing a tricky run-chase. However, the YMCA top-order batter looked like he was batting on a different pitch to almost everyone else, striking multiple boundaries through the off side and a big six over the mid-wicket fence.

Like Tector, Dickson hadn’t had the World Cup he wanted – with 14 and 0 his only two innings so far. The Instonians batter dug in early and ground out an innings of true quality, becoming more elaborate in his shot-making as his innings went on. He struck three sweetly-timed maximums on the way to his 78* off 88 balls – finishing the match with a big straight six, followed by a driven four to clinch the win.

The win today means Ireland Under-19s will automatically qualify for the next Under-19s World Cup in 2024.

Ireland’s next match – the Plate Final - will be against UAE on Monday. This will be the second Under-19s Plate Final Ireland has made, but their first Plate win if successful.

After the match, Muzamil Sherzad said about the win:

“It was a brilliant day for us today - both the batting and bowling performance, and hopefully we can continue this into the Final.”

“It was brilliant, my first five-fer – but, I am just happy to take the wickets for my team.”

And can Ireland win the Plate Final?

“Yes, the way we played today was great, and if we can repeat that then we can beat UAE in the Final.”