Netherlands A hit back hard to square series with Ireland Wolves 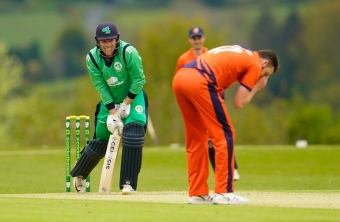 OAK HILL, Wicklow – Netherlands A’s Vivian Kingma rattled the Ireland Wolves early, and set up a 5-wicket win for his side in the rain-affected second match of the series at Oak Hill Cricket Ground in Wicklow today.

After the dominant win by the Wolves in Game One of the series, captain Harry Tector opted to bat first after winning the toss - but, unlike yesterday’s batting heroics, the men in green came back to earth with a thump as they were reduced to 10-5 within 6 overs. Having waited almost two hours to get out on the field after persistent showers delayed the start of play, the Dutch bowlers Vivian Kingma (3-5) and Paul van Meekeren (2-28) found early pace, bounce and movement - aided in no small part by some possibly injudicious shot selections.

The Wolves batters looked impatient, trying to force shots early. On another given day, the edges and mistimed shots played may have flown to safety – but today it seemed every chance went straight to hand.

Yesterday’s hero Shane Getkate was once more left to save the innings, and his 32 was another vital contribution with the bat after his 74* yesterday. An innings of different nature to his last 40-ball six-laden knock, today Getkate showed more patience and was prepared to work the singles, while waiting to punish the bad ball.

With wickets tumbling at the other end, it was at 55-8 that Craig Young came in and provided much-needed support for Getkate. Young hit his highest List A score of 30 from 21 balls, but unfortunately fell to a spooned catch to cover.

The Wolves eventually succumbed for 94 from 23.5 overs.

The Dutch side lost two early wickets with Young and Graeme McCarter removing Vikram Singh (0) and Ben Cooper (5). Stephen Myburgh and Netherlands A captain Scott Edwards stabilised the innings before McCarter induced a leading edge to dismiss Myburgh for 23 and Bas de Leeds was trapped in front for his second duck in consecutive innings.

Edwards though kept the scoreboard ticking over and smashed a big six off Ben White to win the match, with Netherlands A reaching 98-5 in 16.3 overs.

The Wolves’ bowlers bowled well, with Chase (2-31) and McCarter (2-36) taking two apiece, but in the end the total was too small to defend.

Kingma was named Player of the Match.

The two sides return to the same venue for the final match tomorrow with the series at 1-1.

Netherlands A won by 5 wickets