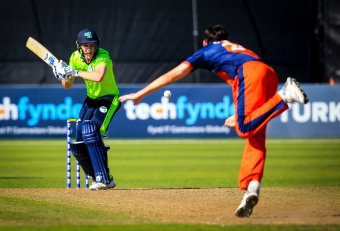 Ireland set a competitive target, but the Dutch side were ruthless in the run chase

DUBLIN – The Netherlands have chased down a sizeable Irish target to win today’s match and leave the GS Holding T20I Tri-Series table in the balance.

Irish captain Gary Wilson won the toss and elected to bat first, and his side put on a competitive total of 181-7 from their 20 overs. The home side went in to the innings break though feeling like they were 20-30 runs short, given they were at one stage 128-2 in the 12th over.

Andy Balbirnie followed up his 64 yesterday with 45 from 26 balls today, to continue his great year with the bat. However the batting plaudits went to 19-year old Harry Tector who scored 60 from 40 balls in only his second international appearance.

A rash of late wickets, and tighter Dutch bowling, restricted the Irish side from capitalising on their fast start, but 181 still would have seemed defendable.

In response, Mark Adair struck early removing Tobias Visée for a duck, however Max O’Dowd (69 from 45 balls) and Ben Cooper (91* from 56 balls) took the game away from Ireland with a 144-run stand.

Despite three late wickets to George Dockrell (3-23), the Dutch side claimed the victory with five balls to spare.

Ireland and Netherlands are now joint top of the table, both with one game in hand. The Scots are two points behind but have two still to play. The next match in the GS Holding T20I Tri-Series is between Scotland and Netherlands tomorrow at 1.30pm, with free entry to all fans and a livestream broadcast available via Cricket Ireland’s Youtube channel.