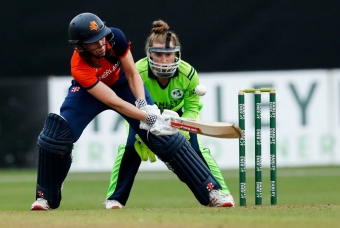 DUBLIN – Netherlands Women recorded a historic first-ever win over Ireland in the fourth and final T20 International of the series against Ireland at Malahide today.

The Dutch side had never beaten Ireland in an international match in 10 attempts, but today proved too strong in a rain-affected encounter by 7 wickets (DLS) – led by an outstanding 62* from 35 balls from Player of the Match Babette de Leede.

de Leede put on a match-winning 85-run partnership for the third wicket with Player of the Series Miranda Veringmeier as the Netherlands chased down a DLS-adjusted target of 118 from a maximum of 15 overs, achieving the target in 13.3 overs.

After taking an unassailable lead in the series yesterday, Ireland made three changes for this final match – resting Orla Prendergast, Lara Maritz and Ava Canning, with Celeste Raack, Rachel Delaney and Georgina Dempsey coming into the playing XI.

Following a rain-interrupted start, Ireland’s batting hero in the last match, Gaby Lewis, fell early for 5 hitting a half-tracker straight to square leg. Lewis’ opening partner Rebecca Stokell was then joined by the Irish captain Laura Delany and the pair put on 85 runs for the second wicket from 82 balls. Stokell and Delany battled through frequent rain showers that saw players leave the field three times, reducing the match in the end to a 15 overs-a-side game.

Rebecca Stokell brings up her highest score for Ireland, she's moved on to 40* from 36 balls.  pic.twitter.com/ls4ptYXduS

Delany’s 39* from 43 balls looked to be a continuation of her batting form from earlier in the series, while Stokell hit her highest score for Ireland – 48 from 43 balls, falling on the last ball of the innings. Looking nervous early, Stokell grew in confidence during her knock, hitting a big six down the ground along with five boundaries.

The two sides will now prepare for the ICC T20 World Cup Europe Qualifier in August.