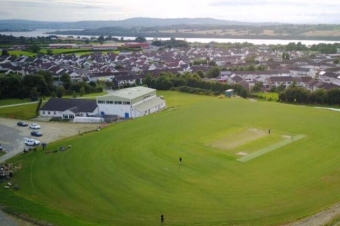 NEWBUILDINGS – During the recent Clear Currency National Cup draw for 2020, the tie: ‘Newbuildings versus Ballaghaderreen’ was drawn out for the first round. While the County Derry-based Newbuildings look forward to welcoming their Connacht counterparts in late May, behind-the-scenes there is an ambitious plan to build a home ground to not just welcome opposition clubs, but to welcome the whole community.

Located just four miles from the centre of Derry-Londonderry, the rural village of Newbuildings is home to a cricket club with big plans – but plans backed up with a track record of delivery and the support of both the local community and a small army of dedicated volunteers. The plan is part of a longer term vision to create a legacy that the wider community will benefit from.

Newbuildings Cricket Club, playing in the North West Cricket Union, was formed in 2011. The club has had a remarkable journey over the last decade, starting out in the NWCU Qualifying Leagues and Mid-Week League using a ground-share arrangement with two other clubs, Newbuildings has developed itself into an established club with nearly 300 members.

The club currently boasts four men’s teams, a women’s team, and three youth teams. In advance of the 2020 season, the club’s hierarchy also endorsed the formation of a new Under-13s Girls team - recognising the potential of, and growing interest in the region for more women’s and girls’ sporting opportunities. Image: Newbuildings ground under preparation for the new season

“It’s been quite a journey for the club – from starting out with very little, and a temporary ground-share arrangement with Glendermott and Brigade. As we grew, we needed to seek out alternative grounds, and were fortunate to negotiate a rolling arrangement with Foyle College on their Springtown site.”

“Through the dedicated fundraising of the clubs volunteers, we then raised enough funding in 2014 to purchase four acres of land in the village at Duncastle Road, Newbuildings. This was to be our new home ground, but there was the need to seek Public Access and planning permissions to develop the site. We succeeded in gaining approvals, and in 2015 we commissioned locally-based Shane Birney Architects to design a new pavilion to meet the needs of the cricketing community in Newbuildings.”

The proposed new pavilion’s design comprises changing rooms, a social space and meeting/conference rooms. It is both contemporary and sympathetic to the surrounds, and will feature a range of measures measures which make the facility extremely energy efficient. This was a priority for the club - to ensure the building would be environmentally friendly and running costs were kept low, helping the facility to remain sustainable in the future.

Off-field work was matched by on-field success, and the Club won promotion to the Championship league for the start of the 2015 season, as well as claiming their second senior trophy, the Samuel Jeffrey Memorial Shield.

The club volunteers worked tirelessly to progress the capital renovations of the new site, which included ground and pitch preparation, installation of an all-weather wicket and installation of fencing. But there was the matter of a temporary clubhouse to support the Club, while funding was sought for the permanent Birney-designed clubhouse.

“For a temporary clubhouse, Cricket Ireland’s Club Facility Fund helped us to purchase a temporary pre-fabricated unit from the old Ebrington Primary School site,” said Mr Allen. “It was re-fitted in-kind by local tradespeople. We finally opened our doors to the cricketing community in 2016 right in the heart of the village.”

“Today our temporary facilities serve the activities of over 500 people per week, which includes programmes that promote cricket, physical activity or engage the families in a sport with intergenerational appeal.”

The early part of 2020 will see some investment into the wider site at Duncastle Road to allow for accessible paths and a car park of which the cricket club can avail. However, the Club is acutely aware that vital funds are still required to complete their plans, most notably being the construction of the new clubhouse.

“At Newbuildings CC we have been striving to build a successful cricket club from our introduction to the league in 2011. We have a wonderfully, picturesque ground which we have developed into a fantastic cricket facility, through the hard work and dedication of our many volunteers, who have raised over £100,000 towards the project so far.”

“As chairperson of the club I take great pride in what we have achieved, and it is our main objective in 2020 to secure the remaining investment required to complete the project.”

The Club estimate the total development cost will be in the region of £300,000, and in conjunction with the North West Cricket Union, they have been engaging a range of funding bodies. They are hopeful that such a community-based project in a state of readiness and permissions in place will be looked on favourably, and they can finally bring their ‘Field of Dreams’ to fruition.